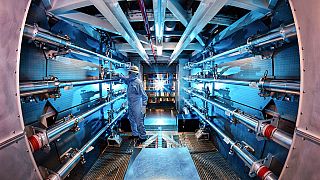 In this 2012 image provided by Lawrence Livermore National Laboratory, a technician reviews an optic inside the preamplifier support structure at the laboratory.   -  Copyright  Damien Jemison/AP
By Euronews  with AP  •  Updated: 13/12/2022

Scientists announced Tuesday that they have for the first time produced more energy in a fusion reaction than was used to ignite it, hailed as a breakthrough in nuclear research.

Researchers at the Lawrence Livermore National Laboratory in California achieved the result, which is called net energy gain, the Energy Department said.

Net energy gain has been an elusive goal because fusion happens at such high temperatures and pressures that it is incredibly difficult to control.

The breakthrough will pave the way for advancements in national defence and the future of clean power, Energy Secretary Jennifer Granholm and other officials said.

“Ignition allows us to replicate for the first time certain conditions that are found only in the stars and the sun,'' Granholm told a news conference in Washington.

"This milestone moves us one significant step closer to the possibility of zero-carbon abundant fusion energy powering our society".

Fusion ignition is “one of the most impressive scientific feats of the 21st century," Granholm said, adding that the breakthrough “will go down in the history books".

Appearing with Granholm, White House science adviser Arati Prabhakar called the fusion ignition “a tremendous example of what perseverance really can achieve" and "an engineering marvel beyond belief.''

Proponents of fusion hope that it could one day offer nearly limitless, carbon-free energy and displace fossil fuels and other traditional energy sources.

Producing energy that powers homes and businesses from fusion is still decades away. But researchers say the announcement marked a significant advance nonetheless.

“It’s almost like it’s a starting gun going off,” said professor Dennis Whyte, director of the Plasma Science and Fusion Centre at the Massachusetts Institute of Technology and a leader in fusion research. "We should be pushing towards making fusion energy systems available to tackle climate change and energy security.”

Kim Budil, director of the Livermore Lab, said there are “very significant hurdles” to jump before the commercial use of fusion technology becomes a reality, but advances in recent years mean the technology is likely to be widely used in “a few decades” rather than 50 or 60 years as previously expected.

Fusion works by pressing hydrogen atoms into each other with such force that they combine into helium, releasing enormous amounts of energy and heat. Unlike other nuclear reactions, it doesn't create radioactive waste.

President Joe Biden called the breakthrough a good example of the need to continue to invest in research and development. “Look what’s going on from the Department of Energy on the nuclear front. There’s a lot of good news on the horizon,” he said at the White House.