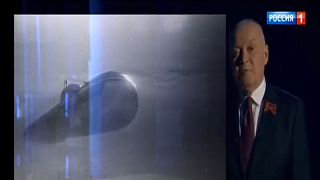 A popular Russian state TV anchor has warned that Moscow could wipe Britain off the map with a nuclear tsunami in retaliation for supporting Ukraine.

In his Sunday evening primetime show on Channel One, one of the most-watched in Russia, Dmitry Kiselyov claimed on May 1 that a strike by the country’s Poseidon nuclear underwater drone could drown the UK under a 500-metre tidal wave of radioactive seawater.

Euronews Next checked his claims with three experts on nuclear weapons, submarines and drones. Here’s what we know - and don’t know - about Russia’s new nuclear torpedo and the damage it could inflict.

What is Russia’s Poseidon nuclear drone?

The Poseidon underwater drone - also known as Status-6 and in the United States as "Kanyon" - is basically a very large, nuclear-powered autonomous torpedo armed with a nuclear warhead.

What we know of it mostly stems from a 2015 leak on Russian TV of a government project for an underwater nuclear drone.

According to its mission statement, the project was focused on “damaging the important components of the adversary's economy in a coastal area and inflicting unacceptable damage to a country's territory by creating areas of wide radioactive contamination that would be unsuitable for military, economic, or other activity for long periods of time”.

The torpedo, which Russia named Poseidon, is about 20 m long, can go 1,000 m deep and has a range of at least 10,000 km, Sidharth Kaushal, a research fellow for seapower and missile defence at the UK defence and security think tank RUSI, told Euronews Next.

Much of its actual capabilities remain shrouded in mystery, but its key strengths are thought to be its ability to operate very deep and very fast underwater, making it hard to intercept.

"It's a torpedo which has an extremely long-range, can travel at high speed and then packs that nuclear punch," said David Hambling, a technology journalist specialising in defence who has authored a book about drones.

What motivated its development was Russia’s ambition to display a range of weapons that can evade the US missile defence system, said Pavel Podvig, an expert on Russian nuclear forces and senior researcher at the United Nations Institute for Disarmament Research (UNIDIR).

Poseidon is referred to as a drone because it can navigate autonomously, and may even have the ability to be remotely redirected, or have its mission aborted after it’s launched.

It’s believed to have a titanium hull, which allows it to withstand pressure at extreme depths, and could potentially be used as a seabed weapon, meaning "you don't have to risk a pretty large, very expensive and possibly quite noisy submarine in order to launch it," said Kaushal.

In other words, the idea would be to pre-position the torpedo on the seabed and activate it from there rather than launching it from submarines, which would make these an obvious target for preemptive strikes.

Poseidon is estimated to have a top speed of over 50 nautical mph, or over 90 km/h - which would make it twice as fast as a conventional submarine, and that much harder to detect.

"It's more difficult to intercept because, you know, while missile defences exist, very few countries are prepared to defend against a nuclear torpedo, particularly one that moves very fast," Kaushal said.

But in the grand scheme of things, he said, it’s not that different from any other nuclear weapon.

"In truth, intercepting a nuclear strike, whether it's a torpedo at sea or an ICBM (intercontinental ballistic missile), is an inherently difficult task against any sophisticated attacking body. I don't know if this particular capability changes much in that respect," he said.

How powerful is Poseidon?

Defence experts say that based on what’s known about the weapon and its dimensions, the yield of Poseidon’s nuclear warhead could be as high as 2 megatons - a figure repeatedly reported by the Russian TASS news agency in recent years.

That’s huge - more than 100 times the force packed by the Hiroshima bomb, which was about 15 kilotons, and more than 10 times that of the latest version of the B61 nuclear bomb developed by the US.

"Atomic torpedoes have existed way, way back, certainly since about the 1950s. And your normal torpedo is about half a metre in diameter and weighs a few tons," said Hambling.

"This thing is at least 1.5 m in diameter and weighs tens of tons, so it's carrying a very big warhead".

However, the three experts Euronews Next spoke to all cast serious doubts on the claim made by Russian TV anchor Kiselyov that Poseidon’s warhead packed a yield of 100 megatons.

Hambling called the claim "simply insane - that would be the biggest warhead ever deployed".

"I mean, with the current Russian regime, who knows? It's possible that they might have the hubris to build something like that, but it certainly is grotesquely gigantic," he said.

Could Poseidon really cause a radioactive tsunami?

"The explosion of this torpedo near the British coast will cause a giant tsunami wave up to 500 metres high," Kiselyov warned in his May 1 primetime show.

He added that "the wave would also carry extreme doses of radiation and after its passage over Great Britain leave a radioactive desert, unfit for anything for a long time".

Kiselyov’s comments were illustrated by an animation of the giant torpedo, a massive menacing wave, and of the UK and Ireland being wiped off the map.

The experts Euronews Next spoke to said the threat was in no way realistic.

"We know that from quite a lot of work which was actually done again back in the crazy days of the Cold War about doing this very thing, and creating tsunamis with nuclear weapons," Hambling said.

"It turns out you need a vast amount of energy to do that - even more than you can get out of a nuclear blast," he explained, noting that earthquakes fared much better at causing tsunamis.

"If it's moved into a harbour and detonated very close offshore, it would certainly be able to destroy a city. But it probably wouldn't damage much beyond that, and it certainly wouldn't do as much damage as a large nuclear airburst," Hambling added.

Kaushal said a Poseidon strike could "certainly render a coastal city uninhabitable," or destroy "a good part of a carrier battle group at sea".

"It could wipe out a coastal city but not the UK as a whole," he said, adding that dealing with flooding caused by radioactive water would be a challenge.

If it's moved into a harbour and detonated very close offshore, it would certainly be able to destroy a city. But it probably wouldn't damage much beyond that.

Such a strike would throw up a large radioactive cloud at sea "that would cause devastation over quite a region," said Hambling, noting that France, Belgium, the Netherlands and Scandinavian countries would also likely be affected.

As with all nuclear weapons, it's precisely that threat of atomic fallout that counts and serves as a deterrent on the global stage, said Podvig.

"It's just maybe a different level of insanity” on the scale of nuclear threats, he said, adding that Poseidon is “a political weapon, in many ways: I mean, it was almost made for this kind of TV show".

Is the Poseidon nuclear drone ready for use?

“Reportedly, there were tests - but how successful those tests were, what is exactly the status of this programme at this point? Frankly, we don't know yet,” said Podvig.

“I strongly believe that it is not yet anywhere ready for deployment,” he added.

Kaushal said Poseidon probably is ready, but its delivery system may not be.

"The special-purpose Belgorod submarine, though it's undergone sea trials in 2021, is still not operational, to the best of our knowledge," Kaushal said, noting that the sub had to be elongated to serve its purpose as a mothership for the giant torpedo.

HI Sutton, an expert on submarine technology who runs the Covert Shores blog, has similarly debunked several of the claims made on Russia’s Channel One, including the size of Poseidon’s warhead and the tidal wave it could cause.

So why is Russia waving this threat now?

Russia has been quite vocal about its nuclear capabilities since it began its invasion of Ukraine, warning the West it had the right to use nuclear weapons to counter an “existential threat”.

"The destruction of conventional capabilities in the first months of this campaign means that Russia's conventional deterrent is now far less threatening than perhaps it was on February 24 to many countries," Kaushal said.

Brandishing its nuclear arsenal is a way for Moscow to discourage any possible direct intervention from NATO in the conflict, he added.

So, is this yet more bluster?

"When you look at Ukraine, we see the reality of Russia's military capability compared to their boasts and their ambitions," Hambling said.

"And certainly their capabilities fall well short of their aspirations in terms of military technology. So it may be also that Poseidon is really just a bit too ambitious for them to turn into reality".