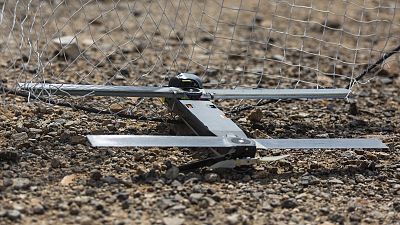 The US Defense Department is in the process of buying new tank-busting "kamikaze" drones for Ukraine, as part of efforts to help the country fight off Russia's invasion.

The Pentagon is negotiating with company AeroVironment to procure 10 Switchblade 600 drones, a new dive-bombing, armour-piercing tactical drone that explodes on impact, Bloomberg reports.

AeroVironment did not immediately reply to a request for comment. Here's what we know about its killer drones, and what difference they could make in the war in Ukraine.

US Defense Secretary Lloyd Austin confirmed in April that the Pentagon was sending both variants to Ukraine.

According to Bloomberg, the US has committed to send at least 700 Switchblades to Ukraine, and at least 100 have already arrived. So far, those have been the Switchblade 300, a light single-use drone that fits in a backpack and is designed to attack personnel and light vehicles.

AeroVironment says in a factsheet that the Switchblade 300 cruises at around 100 km/h and carries cameras, guidance systems and explosives to dive-bomb into its target. It can fly for up to 15 minutes and 10 km before striking.

It’s launched from a tube and its small size allows it to take off from a variety of air, sea, and ground platforms. The whole kit - including the payload, launcher, and transport bag - weighs just 2.5 kg.

This aims to ensure that strikes are precise and can be called off at the very last minute if they endanger civilians or properties nearby.

The larger Switchblade 600 - the one soon heading to Ukraine - is a next-generation loitering missile that’s able to destroy armoured targets like tanks, but can still be set up and operational in less than 10 minutes, according to AeroVironment.

It has a range of around 40 km and an endurance of about 40 minutes - but is much heavier as a result, with the drone and missile it carries together weighing close to 55 kg.

The drone operator uses a tablet-based touchscreen fire-control system with the option to pilot the missile manually.

What other drones are used in Ukraine?

These are Bayraktar TB2 unmanned aerial vehicles, which Turkey has already sold to more than a dozen countries, including Azerbaijan, Libya, Morocco and Ethiopia.

The drones have carried out unexpectedly successful Ukrainian attacks in the early stages of Russia’s invasion - before the Russian forces were able to set up their air defenses in the battlefield, according to Jack Watling of the London-based Royal United Services Institute.

He said Ukrainian forces "have been essentially flying in at a low-level and then coming up and raiding with them. So striking targets of opportunity.”

The United States has sent over $3.4 billion (€3.26 billion) worth of military aid to Ukraine since Russia invaded on February 24.

The weapons include howitzers, anti-aircraft Stinger systems, anti-tank Javelin missiles, ammunition as well as recently-disclosed "Ghost" drones, which were developed by the US Air Force for attacking targets and which are also destroyed after a single use.

Lithuania gets fundraised drone for free, from Turkish manufacturer