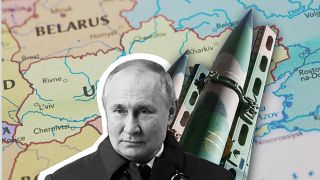 In 2019, a new type of hypersonic weapon called the DF-17 was unveiled during a military parade to commemorate the 70th anniversary of the founding of the People’s Republic of China.

Now, just under three years later, the Russian Ministry of Defence has claimed the first combat use of one of these missiles in its ongoing war in Ukraine, specifically an air-launched Kinzhal hypersonic weapon.

In a way, the label "hypersonic" could be considered misleading for these new kinds of arms systems because it is not necessarily the hypersonic speed at which they travel that constitutes a significant development.

Rather, what distinguishes these new kinds of weapons is their ability to change trajectory after they’ve been launched and their capability to evade radar detection by flying low in the atmosphere, in addition to travelling at hypersonic Mach 5 speeds.

“Their trajectory and their path is much more difficult to predict, especially if they're manoeuvrable," Dr Chris Combs, a Dee Howard endowed assistant professor at the University of Texas at San Antonio, told Euronews Next.

"So that is very concerning for a lot of world leaders because it will significantly decrease response time if one of these weapons is fired, which can create a lot of instability and put people into positions where they have to make a very hard decision, very fast".

Why would Russia use hypersonic missiles in Ukraine?

The targets of the Russian strikes were an underground weapons storage unit in western Ukraine’s Ivano-Frankivsk region on March 18 and another against a fuel storage site in central Ukraine in the Mykolayiv region on March 19.

The biggest takeaway is that, as Syria or other countries before became a test bed for all sorts of weapons because of the ongoing conflict, now the same fate is experienced by Ukraine.

While US and Ukrainian officials have not confirmed that it was a hypersonic missile strike, they have confirmed that two targets were indeed struck by Russian artillery.

As to why Russia may have decided to deploy these new weapons in Ukraine, experts believe the two strikes may have had different objectives.

"In the case of the strike against the hardened underground weapons storage or munitions depot, there seems to be a very real military mission for that, especially given that it is located quite far from the front line and from the places where Russian strike systems are actually deployed," Dimitry Stefanovich, Research fellow with the Centre of International Security at the Russian Academy of Sciences, told Euronews Next.

"You need something fast, something that can strike deep under the ground to actually have success, so there is military value," he explained.

Stefanovich believes the second strike to have had less direct military value, noting that it was a soft target within the range of Russia’s other strike systems.

Instead, he believes the intention might have been simply to test or demonstrate Russia’s hypersonic capabilities.

"The biggest takeaway is that, as Syria or other countries before became a testbed for all sorts of weapons because of the ongoing conflict, now the same fate is experienced by Ukraine," Stefanovich said.

"And well, actually, this is a catastrophe for everyone. For all of Europe and for Russian and Ukrainian people alike".

Could Google detect diseases from smartphone mics and photos?