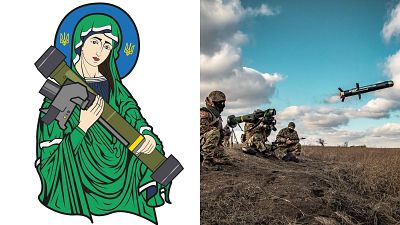 For people of faith, Mary Magdalene is an icon of redemption; the embodiment of the mantra that no matter how far you fall, there is always hope for a second chance. For the people of Ukraine, a reimagined image of her bearing a particular weapon has become a potent symbol of resistance.

Having started as a meme, St Javelin of Ukraine, as she is now known, is becoming an increasingly familiar sight on social media and elsewhere.

In her most recent iteration, the halo encircling her head is not the radiant gold you would expect from centuries of religious iconography but rather the blue and yellow of the Ukrainian flag. Her flowing robes are green, reminiscent of khaki army fatigues. Rather than joined in prayer, her hands instead cradle a FGM-148 Javelin anti-tank missile launcher.

The US-made, shoulder-fired weapon is being widely seen as pivotal to Ukraine's defence against Russia's ongoing invasion - and has been taken to the hearts of both fearful Ukrainians trapped inside the besieged country and the diaspora watching in horror outside its borders.

Amongst the latter is Christian Borys, a Ukrainian-Canadian marketer and former journalist who worked in Ukraine from 2014 to 2018. He first embraced the original meme after first seeing it months ago as geopolitical tensions simmered.

"A friend of mine who is in the Ukrainian defence industry told me he had made some stickers out of that meme and sent them out to some friends across Europe and it was just a symbol of support for Ukraine," he told Euronews Next.

"Because everybody knew Ukraine was getting left in the dark".

When it became clear that hostilities were imminent, the germ of an idea took root.

And raise money he did.

Setting up a fundraising merchandise store called St Javelin a week before the invasion, Borys has so far raised more than $400,000 (€358,000) for Help us Help, a Canada-registered Ukrainian charity, by selling items bearing the saint's likeness.

"Although I'm not a journalist anymore... I still followed everything and I was still friends with people whose job it is to follow these things so they were ringing alarm bells in October, November, December," he said.

"I started it last Wednesday and it was because it was increasingly clear an attack was imminent".

Why is the Javelin so popular? It's just a symbol of support, honestly. I really thought it caught a nerve with people, looking for ways that they can support Ukraine.

Printing just 100 stickers of the missile-toting idol, the operation rapidly grew after the redesigned meme was shared in the stories of the campaign's Instagram account, selling out in its first 24 hours. A new print run of 1,000s stickers sold out just as quick.

"Why is the Javelin [sticker] so popular?" Borys asked. "It's just a symbol of support, honestly. I really thought it caught a nerve with people, looking for ways that they can support Ukraine.

"Russia has completely destroyed their reputation with this. He's [Putin] really done irreversible damage to Russia and the Russian reputation. And I think a large part of what you're seeing now is people really, genuinely, understanding what Russia has done is a completely unprovoked, unjustified action.

"They [people buying the stickers] just want to help Ukraine as much as possible. It's like seeing a kid get beat up by a bully. And you're like, 'no, I want to help that person as much as I can'".

The most prominent feature of the sticker's design is the Javelin missile launcher itself. So why is it so significant and why has it captured the beleaguered public's imagination?

Far from being a wonder weapon, the Javelin is nonetheless being lauded by many Ukrainians as an invaluable tool for the defenders slowing the advance of Russian ground forces further into its territory.

Deployed for the past 20 years in the US military and 20 allied nations, the Ukrainian army now has more Javelin missiles than some NATO members, Russian defense minister Sergey Shoigu claimed in a meeting of Russia's Security Council on Monday.

The US furnished Ukraine with 300 missiles at the end of January, having sent a further 180 projectiles and 30 launchers in October 2021.

On Saturday, President Joe Biden announced a further $350 million (€310 million) in military assistance to the Ukrainians, including more Javelins.

"Javelin is probably quite effective against most Russian armoured vehicles, and it is probably more capable against heavy armour (like tanks) than any other missile system available to Ukraine that can be carried by an individual soldier," Scott Boston, a senior defence analyst at RAND Corporation, told Euronews Next.

"Javelin’s warhead is excellent and the missile can be set to fly in a diving attack profile so that it impacts the less-well-protected roof of the target vehicle. The missile is guided, and is locked on to a specific target by the firer, so even if the target is moving, Javelin has a chance to hit it".

Perhaps its most useful feature is its fire-and-forget system which means the soldiers using it can point and shoot before running for cover, unlike traditional guided anti-tank weapons. It also has a range of up to 4 km, giving an advantage of infantrymen over fast-moving armoured vehicles.

The weapon's effectiveness, however, is limited by various factors, including topological and geographical constraints. Much of central and eastern Ukraine is flat, so there are limited options to conceal its use.

Another is that it is an infantry weapon that needs to be used alongside "a combined arms team that includes tanks, other armored vehicles, artillery, and aircraft," Boston added.

Javelin’s warhead is excellent and the missile can be set to fly in a diving attack profile so that it impacts the less-well-protected roof of the target vehicle.

It's also an expensive piece of equipment coming in at $80,000 (€71,000), making its widespread use in the long-term prohibitive in terms of cost.

"Javelin is very, very expensive for an infantry weapon," Boston said. "This isn’t so much of a problem for Ukraine because they got theirs for free, of course, but it does mean that they were never going to receive as many of them as they would have wanted. They are useful for a lot of things so you have to be selective in what targets you use them against".

The importance of anti-tank weapons in the war - which has so far witnessed intense fighting in large urban centres in Ukraine where inhabitants have been sheltered in metro stations and basements - has been further underlined by donations of Javelins and similar weapons from foreign countries, including NATO members.

Germany, for instance, announced on Saturday in a surprise foreign policy volte-face that it would send 1,000 anti-tank weapons and 500 Stinger missiles to Ukraine. Chancellor Olaf Scholz followed this on Sunday by further announcing that Germany would be permanently increasing its defence spending above the required NATO threshold of 2 per cent of GDP.

"Another important weapon provided to Ukraine in the weeks before the invasion was the NLAW (Next Generation Antitank Weapon), sent by the United Kingdom," Boston said.

"This was an inspired choice, in my view.

"The weapon is easy to use and can evidently be fired from inside buildings. It also appears to have been sent in much higher numbers, which makes sense because it’s a less complex system, as well as shorter ranged than Javelin".