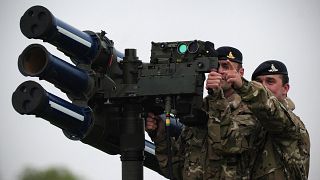 Military experts believe footage of a Russian helicopter being blown out of the sky by a missile in Ukraine shows a British-made weapons system in action.

In March, the UK government announced it may send Starstreak, a form of man-portable air-defence system (MANPADS), to Ukraine to help the country defend itself against the Russian invasion.

UK defence minister Ben Wallace insisted the technology falls within the definition of defensive weapons, as he confirmed on March 16 to the BBC the UK was sending the weapon to Ukraine.

A video circulating on social media shows a helicopter being hit by a missile, reportedly in the Luhansk region, in the east of Ukraine.

The Times newspaper reported a Ministry of Defence source "believed that the video showed Startstreak in action over Ukraine," and that the system had been used in the country for almost a week.

The paper added that senior defence industry sources also believe Starstreak to have been the weapon used in the incident.

The UK was already supplying Ukrainian forces with anti-tank missiles as of late January, ahead of an anticipated invasion by Russia.

Following the invasion, Ukraine has received weapons from a number of NATO allies, including the US which also sent MANPADS, in the form of Stinger missiles.

What is the Starstreak weapons system?

Starstreak is a highly portable, short-range air-defence system, manufactured in the UK.

It can be moved by a person (in the MANPAD role) or mounted onto a vehicle, making it highly flexible and adaptable to different battlefield situations.

One of the standout features is the speed of the projectiles fired from the system. Thales says the missile is made up of three tungsten darts, which reach speeds in excess of Mach 3 (more than 3,700 km per hour).

According to multiple sources including Defence News, this makes STARStreak the fastest short-range surface-to-air missile in the world.

The darts are then released, aimed with laser beams, increasing the likelihood of a hit on the target.

How does Starstreak compare with Stinger missiles?

NATO countries including the US have delivered surface to air missiles to Ukrainian forces to help them defend themselves against Russia.

Although the number is undisclosed, many of these have been the US-made Stinger MANPADS.

Like Starstreak, Stingers can be carried and operated by a single person, and are an effective form of anti-aircraft defence.

They have been in service since the 1980s.

The rocket fired from the Stinger can reach a maximum speed of Mach 2.54 (3136 km per hour), which is slightly slower than the Starstreak.

Its range of up to 4.8 km is also shorter than the Starstreak, which Thales says can hit targets more than 7 km away.

EU is banning Russia's biggest bank from SWIFT. Here's why it matters