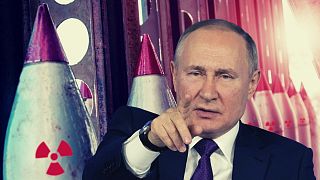 Russia has repeatedly waved the threat of using nuclear force to have the upper hand in its war in Ukraine.

When President Vladimir Putin announced a partial mobilisation of reservists this month, he issued another thinly-veiled threat of Moscow’s readiness to use nuclear weapons in the conflict.

His September 21 televised address came days after the Ukrainian army pulled off a surprise counteroffensive to recapture territory around its second-largest city, Kharkiv, in the east.

"I want to remind you that our country also has various means of destruction... and when the territorial integrity of our country is threatened, to protect Russia and our people, we will certainly use all the means at our disposal," Putin said.

The comments sparked alarm and outrage in the West, with US president Joe Biden accusing Russia of making "reckless" and "irresponsible" threats.

"A nuclear war cannot be won and must never be fought," Biden told the United Nations General Assembly, repeating a Cold War pledge from both countries to abide by the 1968 Treaty on the Non-Proliferation of Nuclear Weapons.

So, what nuclear weapons does Russia have at its disposal, and how destructive could they be?

If Putin felt his rule was threatened, if he didn't show some success in Ukraine or he didn't look strong, would he reach for a nuke?

Pavel Podvig, an expert on Russian nuclear forces and senior researcher at the United Nations Institute for Disarmament Research (UNIDIR), says there are very few scenarios on the battlefield where the immense power yielded by nuclear weapons might actually have a tactical purpose - for example, to destroy hardened underground structures or bunkers.

"It's not like there are Iskander missile launchers driving around with their nuclear warheads installed, and there are no aircraft sitting on the tarmac with nuclear bombs attached - no, we're not there," Podvig said.

They would produce a mushroom cloud, a fireball. They would set fire to everything in sight. They would release massive amounts of radiation