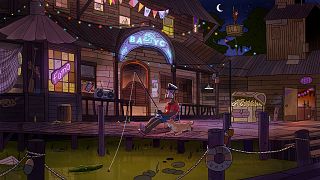 The company behind the popular “Bored Ape” series of NFTs raised around $285 million (€270 million) as of Sunday in what is considered the “largest NFT mint in history” in a much anticipated digital land sale for its metaverse project.

But the rush to buy land from the company Yuga Labs slowed the entire Ethereum blockchain over the weekend. On Monday,  ApeCoin (APE) prices slid as much as 11 per cent.

The company is best known for creating the Bored Ape Yacht Club NFT (non-fungible token) collection, representing 10,000 computer-generated cartoon apes, which can be worth hundreds of thousands of dollars each.

In March it raised $450 million (€427 million) in funding to build the “Otherside”, a decentralised Bored Ape-themed metaverse.

Although little is known about Yuga Labs’ virtual world, enthusiasts on Sunday rushed to buy its “Otherdeeds” NFTs, which it said could be exchanged as plots in its virtual land.

But it resulted in some of the highest transaction costs - or “gas fees” - in the history of the Ethereum network due to the high demand, with investors spending over $176 million (€167 million) on fees alone in the past 24 hours, according to CoinDesk. Those fees cost in some cases more than double the Otherdeed NFT itself.

“This has been the largest NFT mint in history by several multiples, and yet the gas used during the mint shows that demand far exceeded anyone’s wildest expectations,” Yuga Labs said on Twitter.

“We're sorry for turning off the lights on Ethereum for a while”.

As a result, Ethereum’s transaction tracker crashed and transactions were slowed on Ethereum-linked services.

Despite the main arguments in favour of decentralised finance (DeFi) slashing fees by cutting out the middleman, the expensive incident throws into question Ethereum’s long-term viability for NFT sales.

At the end of its apology Tweet, Yuga Labs suggested it could build its own dedicated blockchain.

“It seems abundantly clear that ApeCoin will need to migrate to its own chain in order to properly scale. We’d like to encourage the DAO [decentralised autonomous organisation] to start thinking in this direction”.

The company said it was "working on refunding all Otherdeed minters with failed transactions their gas. Note that you do not need to do anything - we will transfer it all back to your wallet and announce when it is completed. Don't click any links".

Why are people shelling out millions on virtual land in the metaverse?

These are the tech trends to watch out for in 2022