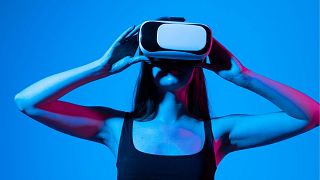 The new year brings with it many of the emerging technology trends seen in 2021, including the next phase of the Internet and the metaverse, but it may also spark a human renaissance where we question the role of technology.

Euronews Next looks at what is in store for 2022.

Web3 was 2021’s buzzword and in 2022, we can expect companies will try and jump on the bandwagon for this decentralised vision of the Internet.

Web3 is defined by the technology of blockchain, the same system used by cryptocurrencies and non-fungible tokens (NFTs) but aims to use an egalitarian philosophy to cut out the Internet’s central gatekeepers such as Google and Facebook.

Technology is just a tool and it’s not the purpose. I think there’s going to be a renaissance in the sense of people saying, ‘we're going to rethink this to see if it's actually good for your life.

We are not officially in the Web3 phase of the Internet but the blocks are currently being built. In 2022, we can expect more companies will try and dip their toes into Web3, including Meta, Facebook’s parent company.

Meta is aiming for “deep compatibility” with blockchain technology, according to a New York Times report, citing an internal post to employees from a Meta top executive.

“My overall guidance is to target a deep compatibility with the blockchain,” wrote Andrew Bosworth, Meta’s chief technology officer (CTO).

“There aren’t many places where I expect us to depend on it exclusively yet, but if we see an opportunity to work jointly with entrepreneurs in the Web3 space I expect it will be worth the effort.”

NFTs also exploded onto the tech scene in 2021. This year, we can expect NFT2.0.

In November, the Dutch Blockchain LTO Network revealed an upgrade called Titanium, which solves the issue of current NFTs, which is that most assets cannot be fully possessed and have to be traded through a third party.

The metaverse and a human renaissance

As expected, more companies will also be putting their efforts into the metaverse, the virtual reality and augmented reality world where we can play games, work and socialise.

Though in its early stages, the technology is developing at breakneck speed. Many virtual reality worlds, such as Meta’s, require headsets.

But this could soon develop into augmented reality glasses or even contact lenses.

According to insiders, Apple is working hard on this technology and is predicted to release its own headsets in 2022. Media reports have also suggested Apple’s headsets could include eye tracking and cameras that could blend VR and AR together.

“The whole discussion about the metaverse is essentially telling us that we can live in a virtual space using an avatar and we don't need a body,” futurist Gerd Leonhard told Euronews Next.

While he said he sees potential benefits in the metaverse, for example in the workplace, there could be a “human renaissance”.

“Technology is just a tool and it’s not the purpose. I think there’s going to be a renaissance in the sense of people saying, ‘we're going to rethink this to see if it's actually good for your life.’”

Artificial Intelligence (AI) and machine learning will continue to grow and increasingly so in companies.

AI can help in fields such as healthcare, however, as data is critical for building AI systems, there may be more discussion on how data is acquired and used.

“We have steep development in artificial intelligence so that computers can start to kind of sound like they're making sense,” said Leonhard.

“All of this leads to one final destination, which is to say that humans can be somewhat created, artificially or copied, or that machines are getting closer to being more like humans”.

Cloud technology has been the saving grace for many businesses that have shifted to remote work since the COVID-19 pandemic and will continue to grow.

In Deloitte’s Tech Trends 2022 chronicles, it said automation - such as the cloud, robotics and AI - is the emerging key to sustaining and enhancing operations, which can also empower workers.

“I think tech companies are really recognising that automation is the key to freeing time to be more customer-obsessed. And that's where tech companies are winning today,” Mike Bechtel, chief futurist and Managing Director at Deloitte Consulting LLP, told Euronews Next.

“By examining the lessons learned in the past and applying advanced technology to solve the problems of today, organisations will be able to engineer a better future.”

Why did the Bored Ape team’s metaverse project clog Ethereum?