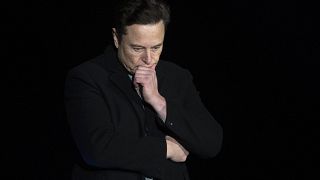 With his offer to buy Twitter for $43 billion (€39.8 billion), Elon Musk may end up controlling the social media platform that contributed to his rise to fame.

Musk is the richest person in the world with a fortune of $262 billion (€240 billion), but it wasn’t plain sailing for the South-African entrepreneur. There were multiple bumps along the road.

Despite being at the helm of companies like Tesla and SpaceX, he was ousted multiple times from his own enterprises, had numerous rocket crashes and it was a slow start before his electric vehicles (EVs) really took off.

Here’s a look back at the various failures and successes underpinning his controversial image.

The early years and enterprises

His first business venture was at the age of 12 when he sold the code for the PC space-fighting game Blastar for $500 (€460) to the magazine PC and Office Technology. "[It was] a trivial game... but better than Flappy Bird," Musk said.

After graduating high school in South Africa, he moved to Canada, where he studied at Queen’s University in Kingston in Ontario for two years.

But he finished his studies in the United States at the University of Pennsylvania and earned a degree in physics and economics.

To pay for rent while he was a student in Pennsylvania, Musk and a classmate rented a 10-bedroom frat house and transformed it into a nightclub.

Musk then studied for his PhD at Stanford University but dropped out of the programme just two days after it began and decided to work in the dot-com bubble.

The start of his fortune

Musk then founded Zip2 with his brother Kimbal in 1995. It was Musk’s first enterprise and it provided online city guide software to newspapers. With no money, Musk actually lived in the office.

As the business took off, the company Compaq bought Zip2 in a deal worth over $300 million (€278 million).

In 1999, Musk then launched X.com, an online banking company. A year later, X.com merged with the Peter Thiel-founded financial start-up Confinity, and PayPal was formed.

Musk was then named PayPal’s CEO, but that didn’t last long. After many disagreements over branding and micro-managing, Musk was fired from PayPal in 2000 while he was on holiday in Australia. Musk told Fortune years later: “That’s the problem with vacations”.

Out of this world and electric ideas

With $100 million of the PayPal money, he founded the company Space Exploration Technologies, better known as SpaceX, in 2002. His goal was to make spaceflight 10 times cheaper.

Proving the critics wrong, SpaceX began developing the Dragon space capsule in late 2004. It was called Dragon in a jab at those who said he couldn’t do it, in a reference to the song “Puff the Magic Dragon”.

In 2010, the spacecraft made its maiden voyage and became the first commercially built and operated spacecraft to be recovered successfully from orbit.

But Musk was also making moves on Earth. In 2004, Musk began investing in the electric car company Tesla. He took an active role in the company and helped develop the first all-electric car, the Roadster. In 2006, Musk was appointed as Tesla’s chairman.

During this time, Musk came up with the idea for the energy company SolarCity, which he put his cousins in charge of in 2006. Tesla would later buy the company in a deal worth $2.6 billion (€2.3 billion).

In 2007, Musk staged a coup at Tesla’s boardroom and ousted Martin Eberhard as CEO and then from the board.

A year later during the financial crisis, Tesla got a $40 million (€36 million) lifeline to save it from bankruptcy, raised by investors and also from Musk's personal fortune.

Musk was then named Tesla’s CEO.

Neither SpaceX, Tesla, nor SolarCity were doing well and were losing money. Musk was living off personal loans to survive.

During this time, SpaceX set many records and supplied the International Space Station multiple times. The company also built the Falcon 9, SpaceX’s most powerful rocket.

Musk also pursued other ideas. In 2013 he published a white paper on a Hyperloop high-speed train that could in theory transport passengers from Los Angeles to San Francisco in 30 minutes.

In 2015, Musk co-founded OpenAI, a non-profit research company aiming to ensure artificial intelligence benefits humanity. He later stepped down from the board to avoid conflicts with Tesla, which is building its own AI for self-driving cars.

In 2016, Musk started The Boring Company, which aims to build a network of tunnels both underground and around cities for high-speed travel.

In 2017, Musk founded Neuralink, which develops devices to be implanted inside human brains.

Musk is all for procreation and said in 2021 that rapidly declining birth rates are “one of the biggest risks to civilisation... I can’t emphasize this enough, there are not enough people”.

Musk has made controversial comments. In 2018, he offered to build a submarine to rescue 12 boys and their football coach who were stuck in a cave in Thailand. A British diver said Musk’s actions were a PR stunt. In response, Musk called the diver a “Pedo guy” on Twitter.

Musk also got into trouble with authorities in 2018 after he said on Twitter he was considering taking Tesla private at $420 (€386) per share, adding: "Funding secured".

The Securities and Exchange Commission filed a lawsuit against Musk, accusing him of making “false and misleading statements”. Musk settled with the SEC and he and Tesla each paid a $20 million (€18 million) fine. Tesla was also ordered to appoint a committee to oversee Musk’s communications.

In 2020, SpaceX partnered with NASA to launch astronauts into space and the company had its first operational human spaceflight, sending four astronauts to the ISS. The same year, Tesla joined the S&P 500.

Meanwhile, Musk and Amazon founder Jeff Bezos were feuding over NASA contracts being granted to SpaceX and not Blue Origin for satellite projects.

In 2021, Musk ruffled a few feathers in the Bitcoin community.

Tesla said it would accept Bitcoin as payment and fill the company’s coffers with $1.5 billion (€1.2 billion) in the cryptocurrency. But Musk later made a U-turn over the environmental concerns of Bitcoin mining and met with miners to try and convince them to turn to greener ways.

In April 2022, Musk bought a 9.2 per cent stake in Twitter, making him the biggest shareholder. But he will not join the board. Meanwhile, former Twitter shareholders in the United States have decided to sue him for allegedly delaying his stake in the social media company so he could buy more of the stock at lower prices.

In a letter to Twitter's chairman, Musk said the company needed to be transformed into a private company to become "the platform for free speech around the globe".

"Twitter has extraordinary potential. I will unlock it," he said.

Does Elon Musk really plan to cut 75% of Twitter's jobs?

Twitter to sue Elon Musk for calling off his takeover bid