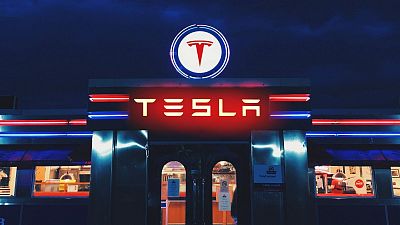 A Euronews composite image of what a diner at a Tesla charging station could look like.   -   Copyright  Unsplash
By Tom Bateman  •  Updated: 19/07/2021

Tesla has filed a trademark for restaurant and food services in a move that hints at the electric car maker's plans for the future of its car charging network.

Tesla founder Elon Musk has previously hinted at plans to expand the offering at the company's "supercharger" charging stations.

In 2018, Musk tweeted that a forthcoming supercharger station in Los Angeles would feature an "old-school drive-in" and "rock restaurant".

Then in April this year, Musk again tweeted that a planned supercharger station in Santa Monica, California, would feature a retro diner.

Tesla now claims to have installed 25,000 superchargers worldwide. The company says its third-generation V3 supercharger can support peak charging rates of up to 250 kilowatts per vehicle.

According to Tesla, this would cut the average charging time to 15 minutes. Or, to put it another way, just long enough to have a burger at a Tesla diner.

This isn't the first time the company has strayed into the food and drink sphere. Last year Tesla started selling its own-branded tequila for $250 (€205) a bottle.