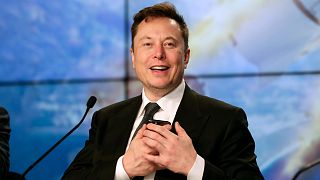 Billionaire Elon Musk has offered to buy Twitter, saying the social media group needs to be transformed into a private company to become "the platform for free speech around the globe".

Twitter said in a regulatory filing on Thursday that Musk, currently the company’s biggest shareholder, had offered $41.39 billion, or nearly €38 billion, to buy the remaining stock he doesn’t already own.

The news comes just days after Musk rejected a seat on the social media company's board, and weeks after he became its single biggest shareholder.

“I invested in Twitter as I believe in its potential to be the platform for free speech around the globe, and I believe free speech is a societal imperative for a functioning democracy,” Musk wrote in a letter sent to Twitter Chairman Bret Taylor and disclosed in a securities filing.

“However, since making my investment I now realise the company will neither thrive nor serve this societal imperative in its current form. Twitter needs to be transformed as a private company,” he added.

Musk's offer price of $54.20 per share represents a 38 per cent premium to the closing price of Twitter's stock on 1 April, the last trading day before his stake of more than 9 per cent in the company was publicly announced.

It values the whole company at more than $43 billion.

Twitter said it had received Musk's offer and will decide whether it is in the best interests of shareholders to accept or continue to operate as a publicly-traded company.

"My offer is my best and final offer and if it is not accepted, I would need to reconsider my position as a shareholder," Musk said in the filing.

"Twitter has extraordinary potential. I will unlock it," he added.

Ever since his stake in Twitter was made public last week, the CEO of Tesla and SpaceX had been tweeting his ideas for the platform, including an "edit" feature that Twitter since confirmed it was working on.

A lawsuit has since been filed by Twitter shareholders in the United States alleging that Musk illegally delayed disclosing his stake in the social media company so he could buy more of the stock at lower prices.

Musk revealed in regulatory filings over recent weeks that he’d been buying shares in almost daily batches starting 31 January, ending up with a stake of about 9 per cent.

After Musk announced his stake, Twitter quickly offered him a seat on its board on the condition that he does not own more than 14.9 per cent of the company’s outstanding stock, according to a filing. But he said five days later that he’d declined.

He didn’t explain why, but the decision coincided with a barrage of now-deleted tweets from Musk proposing major changes to the company, such as dropping ads - its top source of revenue - and transforming its San Francisco headquarters into a homeless shelter.

"I believe this is for the best," Twitter CEO Parag Agrawal said of Musk's U-turn on Monday.

A prolific Twitter user, Musk has amassed more than 81 million followers since he joined the site in 2009 and he has used the platform to make several announcements, including teasing a go-private deal for Tesla that landed him in hot water with regulators.

However, the world's richest person has lately been critical of the social media platform and its policies, and recently ran a Twitter poll asking users if they believed the platform adheres to the principle of free speech. Over 70 per cent of respondents voted "no".

The social media platform has angered followers of Donald Trump and other far-right political figures whose accounts have been suspended for violating its content standards on violence, hate or harmful misinformation.

Musk also has a history of his own tweets causing legal problems.

In December, Musk put out a meme that compared CEO Agrawal with Soviet dictator Joseph Stalin and showed Jack Dorsey as a close associate who was later on executed.

Twitter shares rose to $47.83, up 4.3 per cent but well below Musk’s offer price, a sign that some investors may doubt the deal will go through.

Twitter's latest quarterly results and lower-than-expected user additions have raised doubts about its growth prospects, even as it pursues big projects such as audio chat rooms and newsletters to end long-running stagnation.

"The big question for the Twitter board now is whether to accept a very generous offer for a business that has been a serial underperformer and tends to treat its users with indifference," said Michael Hewson, chief market analyst at CMC Markets.

"Whatever your feelings on Musk, he would certainly shake things up, with the only question as to whether he would make things worse or improve them," he added.