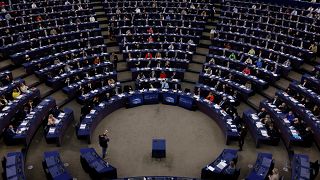 The European Parliament has backed new rules for data sharing, in a move the EU hopes will help harness the power of data and artificial intelligence (AI) to boost innovation across the continent.

The new legislation aims to increase the availability of data for businesses and individuals while setting a raft of new standards for data sharing across the bloc. It will apply to manufacturers, companies and users.

It was first proposed in late 2020 to offer "an alternative European model" to the data handling practices of major US tech platforms.

The idea is to create common European data spaces in a variety of fields including health, energy, agriculture, mobility and finance.

The legislation, known as the Data Governance Act (DGA), was approved by EU lawmakers on Wednesday with 501 votes to 12, and 40 abstentions.

It now needs to be formally adopted by the Council before entering into force.

“Our goal with the DGA is to set the foundation for a data economy in which people and businesses can trust. Data sharing can only flourish if trust and fairness are guaranteed, stimulating new business models and social innovation,” said Angelika Niebler, the German MEP who steered the legislation through parliament.

“Experience has shown that trust - be it trust in privacy or in the confidentiality of valuable business data - is a paramount issue. The Parliament insisted on a clear scope, making sure that the credo of trust is inscribed in the future of Europe's data economy”.

The legislation is part of a broader EU strategy to break Big Tech's hold over the data sphere.

The EU is also working on a Data Act that specifically looks at who can create value from data and aims to "place safeguards against unlawful data transfer," which could affect US or other foreign tech companies.

The European Commission published its draft of that act in late February, with commission Vice President Margrethe Vestager saying at the time: "We want to give consumers and companies even more control over what can be done with their data, clarifying who can access data and on what terms.”

Data disputes between the EU and Big Tech have been growing in recent years.

Meta recently warned it could pull Facebook and Instagram out of Europe if it's unable to transfer, store and process Europeans’ data on US-based servers.

Harnessing the power of AI

According to estimates by the European Commission, the amount of data generated by public bodies, businesses and citizens will be multiplied by five between 2018 and 2025.

"We are at the beginning of the age of AI and Europe will require more and more data. This legislation should make it easy and safe to tap into the rich data silos spread all over the EU,” Niebler said.

“The data revolution will not wait for Europe. We need to act now if European digital companies want to have a place among the world’s top digital innovators”.

MEPs said they had negotiated with EU ministers to ensure there were no loopholes that would allow companies outside of the EU to abuse the scheme.

They are pushing to make the most of data for “objectives of general interest” such as scientific research, health, climate change and mobility.