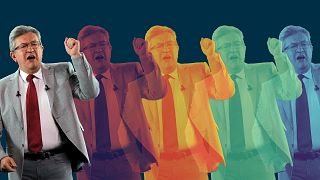 'Holographic' optical illusions and smartphone camera filters mean there are now more versions of Jean-Luc Mélenchon than ever before   -  Copyright  Euronews Next / Canva
By Tom Bateman  •  Updated: 06/04/2022

Ahead of the first round of France's presidential election, which takes place on Sunday (April 10), the far-left candidate rounded out his campaign by holding a rally in 12 places at once, appearing holographically in 11 cities across France.

"It was a technical gamble with 1,000 people involved, but it all worked out," Mélenchon campaign manager Manuel Bompard and organiser Bastien Lachaud told AFP.

In a crowded field of 12 candidates, Mélenchon's campaign represents the most realistic hope for the left of reaching the knockout round of France's two-stage electoral system. The latest Ifop opinion poll puts incumbent president Macron at 27 per cent, far-right challenger Marine Le Pen at 23 per cent and Mélenchon at 16.5 per cent.

On Tuesday - just as during his unsuccessful run for president in 2017 - Mélenchon employed an optical illusion known as "Pepper's Ghost," where a 2D image is projected onto a thin film or pane of glass to give the impression that it's floating in mid-air.

But the holographic (or not) Mélenchon that appeared on Tuesday is not the only virtual version of the 70-year-old campaigning this election.

His campaign has produced Snapchat and Instagram filters of the veteran politician, allowing supporters (and, once again, British journalists) to capture him in unusual places.

Browse the hashtag "#HologrammeDePoche" or "Pocket holograms" on Twitter and you'll find a tiny Mélenchon standing on a picnic table, a gas hob, the steps of the Irish parliament and even on his own shoulder.

I decided to try it for myself, putting him in the fridge, on top of a pot plant, and expanding him to colossal size so that he towered over my Tokyo neighbourhood like a French kaiju on the rampage.

"Je me téléporte," the virtual Mélenchon says, before launching into a call for viewers to turn out and vote in the election.

But figures from the latest Ifop poll suggest his chances of making it into the second round of voting are slim - although Mélenchon's campaign now claims he's "within the margin of error" of getting there.

"Vote, vote, vote," a miniaturised version of the presidential candidate said, from his perch on top of my desk.