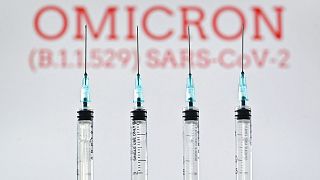 The Omicron variant of COVID-19 may be 105 per cent more transmissible than Delta, the latest research by French scientists has suggested.

The study, which was published on the medRxiv site and has yet to be peer-reviewed, analysed 131,478 screening tests in France from October 25 to December 18 2021.

The results showed that in young people, the prevalence of infection with the Omicron variant or the Alpha variant was higher than that of the Delta variant.

In the most high-risk areas in France, the researchers also found that the number of infections with the former two variants increased significantly over time.

Based on these findings, the researchers compared the infectivity of the virus in people infected with the Omicron or Alpha variant with the transmissibility in people with the Delta variant over a 21-day period. The difference was approximately 105 per cent.

A variant of concern

Omicron was designated a variant "of concern" by the World Health Organization (WHO) in November because previous studies showed it was more transmissible and more resistant to treatment than other COVID-19 variants, including Delta, with people more likely to be infected or reinfected even when fully vaccinated.

Several preliminary studies have also suggested that Omicron is able to invade the upper respiratory tract easier than the Delta variant, but is less effective at infecting the lungs. This could help explain why it is more contagious and its lower mortality compared to Delta.

Warnings after "tsunami of cases"

However, earlier this week the head of the WHO warned against describing the Omicron variant as "mild" amid a "tsunami of cases" overwhelming health systems across the world.

"Just like previous variants; Omicron is hospitalising people and it is killing people," Dr Tedros Adhanom Ghebreyesus, Director-General of the WHO, told reporters during a regular press briefing on Thursday.

"Hospitals are becoming overcrowded and understaffed, which further results in preventable deaths from not only COVID-19 but other diseases and injuries where patients cannot receive timely care".