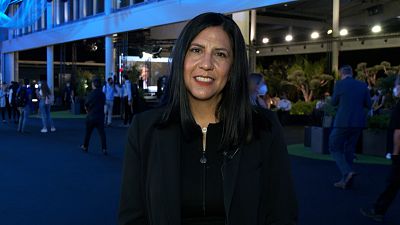 The biggest story from Mobile World Congress 2021 in Barcelona so far is not the latest smartphone, rather the latest developments in telco cloud systems.

Tech giants such as Facebook, Samsung, and Nokia all pulled out of what has been dubbed the Super Bowl of the mobile trade show due to the COVID-19 pandemic.

But one woman saw an opportunity when Ericsson pulled out of the event to create a tech temple christened 'Cloud City'.

Referring to herself as the "Elon Musk of telco," Danielle Royston, the Chief Executive Officer of TelcoDR, a consulting company that shares her initials, is on a mission of her own.

"Twenty years ago, Elon Musk set a mission for Mars, and everyone kind of said, who are you? You're like the PayPal guy," she explained.

I saw it as a really big opportunity to start elevating the conversation around the public cloud.

"But he just very quietly put his head down and started focussing on what are the things you need to do to get to Mars. I'm doing the same thing in telco with the public cloud".

Though she admits her mission is not as challenging as getting to another planet, her objective is to figure out what things telcos need to start doing in order to rewrite all of their software and rethink how they deploy their networks.

One of her first steps in doing so is creating Cloud City in Barcelona, an innovation paradise filled with trees and foliage, comfy workspaces, telepresence robots, and a number of startup cloud companies.

"I saw it as a really big opportunity to start elevating the conversation around the public cloud," Royston told Euronews Next.

She declined to say exactly how much she paid for the stall but she said: "it was in the millions".

While she does not believe the giants who have launched cloud services, such as Google, Amazon, and Microsoft, are coming after her vision of telco software, she says her goal is to "leverage their technologies and use them to the best of their abilities and help drive innovation".

Startups in Cloud City are not just cloud-based but also Open RAN, which Royston says are the two main players in the telco industry.

Despite all the hype and luxuries of Cloud City, a question mark remains over security when we upload data onto the cloud.

An increasing number of cyberattacks have made the headlines recently, including the hacking of the Colonial Pipeline in the United States and the Irish healthcare system, in what experts have called a dangerous rise in online crime that threatens lives.

With a rising number of cloud-based platforms and the increasing scope of the Internet of Things, the security market is expected to expand.

But Royston dispels any doubts that public cloud systems are unsafe.

Royston states cloud services are not interested in stealing data as "it would be a very bad business idea" and bets that in 10 years, everyone will be using the public cloud without any qualms.

While she may have the impressive booth at this year’s MWC, she says next year she will not have the same opportunity to showcase on such a large scale.

Royston will definitely be back, however.

"We'll invite vendors in, continue to change the conversation," she said.

"We'll see how the dinosaurs react to our big push and disrupting the industry and can't wait to see how it evolves".