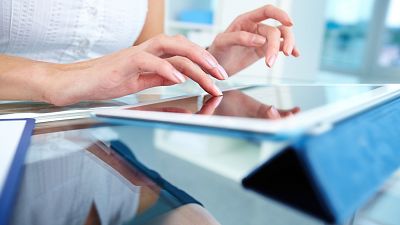 Women in Spain are underrepresented when it comes to "technological abilities".   -   Copyright  Canva
By Pascale Davies  •  Updated: 30/06/2021

Spain is "lagging behind" when it comes to the general population's digital skills, especially women, the country’s Secretary of State for Digitalisation and Artificial Intelligence told Euronews Next.

Speaking on Tuesday at the Mobile World Congress 2021 in Barcelona, Carme Artigas said the Spanish government was tackling the country’s skills shortage head on.

"Women are still underrepresented in the population that has technological abilities," the minister said.

"The jobs of the future will require not only basic skills, but also specialised skills, advanced skills".

Artigas said digitisation was also lacking for small and medium-sized businesses but that Spain is "absolutely focused" on transforming its economic model, something she said, "needs to be tackled urgently".

"We need to endeavour an important digital transformation of our industry in all the sectors, taking into account big companies, but also small and medium businesses, and also our green transition," Artigas told Euronews Next.

She said 43 per cent of the general population lacks digital skills, which has been brought into sharper focus by COVID-19.

"The pandemic has shown us not only the opportunities but also the gaps that still exist in our society. We are talking about digital gaps, socioeconomic gaps and gender gaps," Artigas said.

The Spanish government appears to be serious about its digital transformation, devoting 30 per cent of its coronavirus recovery fund from the European Union to digitalisation.

A report published by the European Commission ranked Spain in 11th place out of the 27 EU member states in terms of its progress on digitalisation.

Technology itself is not ours to take. It is a means for better progress and we need to put people in the centre.

While Spain is mid-table, the 2020 Digital Economy and Society Index (DESI) report does show the country's relatively rapid progress in the last five years, narrowing the gap with Nordic countries who are leading the charge.

“The jobs of the future will require not only basic skills, but also specialised and advanced skills.” ?‍?

Spanish Secretary of State for Digitalisation and AI @carmeartigas explains how the Spanish government is tackling the country’s skills shortage head on at #MWC21 ?

In the 2020 DESI report, Spain was ranked as the second-best EU country for digital public services, largely due to the implementation of a digital strategy through its central government in Madrid.

It will promote the process of a digital transformation in line with the EU’s strategy through public-private collaboration.

It includes 50 measures to be implemented by 2025 involving more than 15 ministries and public organisations.

Spain as a leader in AI

Artificial Intelligence is also key for Spain, a sector Artigas is in charge of.

She said Spain is aiming to be the leader in the development of AI in Spanish as currently there are only AI developments in English.

"We want to put Spain at the forefront of the development of the AI industry around the use of natural language processing in Spanish," Artigas told Euronews Next.

But despite technology and digitisation developing at a fast pace, Artigas is quick to point out where the focus should be.

"Technology itself is not ours to take. It is a means for better progress and we need to put people in the centre," she said.