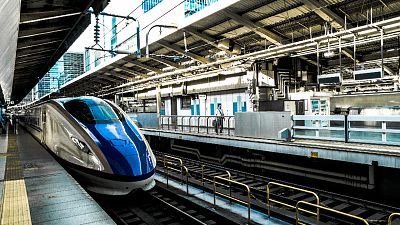 Image shows a high speed train entering a train station. The EU has committed to simplifying transport and rail travel across the bloc.   -   Copyright  Pexels
By Aisling Ní Chúláin  •  Updated: 27/12/2021

Even as COVID-19 continued to restrict our movements this year, human beings still found a number of novel ways to move around in 2021.

Climate change has focused minds on developing a sustainable future, particularly in cities where municipalities around the world have sought to capitalise on the pandemic’s upheaval to make lasting changes to urban mobility.

There's also been some more out-of-the-box mobility stories that could feasibly have been plucked from the pages of a Sci-Fi novel. We’re talking about the likes of engine-powered jetsuits, flying cars and futuristic air taxis.

Here are a few of the headline-grabbing mobility stories that captured our imagination this year.

In 2021, the trend of clawing back space in city centres from cars continued apace. By 2030, Barcelona intends to convert 21 streets - totalling 33 km in the heart of the city - into pedestrian green spaces.

In the German city of Heidelberg, mayor Eckart Würzner is on a mission to reduce car dependency in the city. To this end, the city has bought a fleet of hydrogen-fuelled buses, built a network of bicycle "highways" and offered those willing to give up their cars free public transport for a year.

Paris also began experimenting with going car-free, banning vehicles from 30 per cent of the city’ streets for one Sunday in September. More car-free days are planned for the new year.

Inventor Richard Browning’s engine-powered jetsuit wasn’t built in 2021, but this was the year it inched closer to mainstream use.

The British Royal Marines carried out test flights with the suit to see if it could be used in anti-piracy missions at sea and Browning also demoed the jetsuit’s capabilities to the UK Metropolitan police.

The suit when fully fuelled weighs in at about 30 kilos and can travel at speeds of up to 136 km/h.

This year the electric vertical take-off and landing, or eVTOL, aircraft market continued to take shape.

Companies like Volocopter, Airbus and Urban Aeronautics unveiled new prototypes or announced their intention to seek regulatory approval for their aircraft.

Volocopter began test flights in June in Paris where local authorities, public transportation companies and airport authorities are cooperating to provide an air taxi solution for the Olympic Games taking place in the French capital.

In July of this year, the AirCar, a prototype flying vehicle made by Klein Vision, completed its first inter-city flight lasting 35 minutes.

In December, the EU adopted four proposals that could mean more high-speed rail lines, simpler tickets, and support for international trips across the bloc.

The proposals will serve the development of the Trans-European Transport Network (TEN-T), an integrated, multimodal trans-European network that includes land, sea, and air transport.

Under the plan, all EU member states will share a network that is intermodal and interoperable between the different rail transport providers.

It was a huge year for space exploration with three missions reaching Mars and the space tourism market kicking into a higher gear. Over 130 space missions took place this year with the overwhelming majority of them being successful.