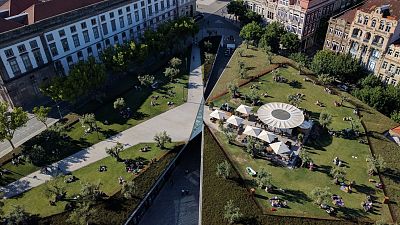 The 15-minute city concept is a concept in urban planning where all person's needs can be met within a 15-minute walk or cycle from home.   -   Copyright  Igor Ovsyannykov de Pixabay
By Aisling Ní Chúláin  & Naira Davlashyan  •  Updated: 17/09/2021

When COVID-19 hit last year, it immediately caused the shuttering of schools and offices, emptied out public transport and in some cases, restricted residents to a tight perimeter around their homes.

But with the adage "never waste a good crisis" in mind, it was precisely these restrictions that have provided urban planners with a ripe opportunity to rethink how we can reorganise our cities in a more ecological, sustainable way.

Enter the concept of the "15-minute city," which stipulates that all of our basic needs should be met within a 15-minute walk or cycle from our home.

The idea, which was originally conceived by cities expert and Paris 1 Pantheon-Sorbonne University professor, Carlos Moreno, was not expressly borne out of the pandemic but it has given it a second wind.

In fact, it may yet reach new heights of popularity thanks to the enthusiastic endorsement of Paris mayor and newly-minted presidential candidate, Anne Hidalgo, who made the "15-minute city" the centrepiece of her successful mayoral re-election campaign last year.

"The 15-minute city is a city where services closeby facilitate life and serve citizens," Professor Carlos Moreno told Euronews Next.

"What we want is that in a city, you don’t have to travel far - no more than 15 minutes - from the place where you live whether that’s to go to work, to do the shopping, to access healthcare, to enjoy culture or to relax".

Instead of cities with distinct districts for living, socialising and working, Moreno’s concept envisages the urban centre as a tapestry of neighbourhoods where all three functions co-exist.

According to Moreno, the dramatic shift towards remote working has demonstrated that the "15-minute city" is not only feasible but could also be instrumental in regenerating urban neighbourhoods.

"I’m not talking about remote working from your home, with the computer on your lap, cats, dogs, children etc… but rather decentralising work," Moreno said.

Creating new spaces is another key element of the "15-minute city".

According to Professor Moreno, in order to provide a maximum of services and activities locally, we must re-imagine how we can best use existing infrastructure.

"But still it’s in very good condition. So we want to make much more use of a building so that it can host activities other than those for which it was originally conceived".

In Moreno’s concept, disused buildings could be turned into co-working spaces. Schools could be opened at weekends for cultural activities. A sports hall by day could be converted into a discotheque by night. Cafés could host language classes in the evenings and public buildings could play host to concerts at weekends.

While the concept of the "15-minute city" is growing in popularity around the world, not everyone is onboard with the idea of hyper-local accessible neighbourhoods.

Critics suggest that it could lead to a type of tribalism and exacerbate existing urban disparities between districts.

We pushed a load of people out to the suburbs where property prices are lower. And we told them ‘ take the train, you can spend an hour commuting to work and you can be grateful to have a job because the world belongs to those who get up early'. With the '15-minute city', we no longer want to accept this situation.

In response to this, Moreno points out that in cities like Paris, inequality between those who live on the outskirts and richer communities who populate the urban centre is already a fact of life.

Having offices, social activities and cultural spaces highly centralised around an urban core strongly favours richer communities who can afford the high rents of a city centre, he argues.

"We pushed a load of people out to the suburbs where property prices are lower. And we told them 'take the train, you can spend an hour commuting to work and you can be grateful to have a job because the world belongs to those who get up early'.

"We can’t keep building further and further out and building three or four new train stations and say to people ‘you have the possibility to come.

"With the '15-minute city', we no longer want to accept this situation".

On the contrary, Moreno believes the "15-minute city" can actually help social cohesion in cities.

"The '15-minute city' will reduce inequality because we want the territory to become polycentric. We want to improve the quality of life in deprived neighbourhoods by setting up co-working spaces, creating green zones with parks, installing businesses, cultural activities, sporting activities and quality cycle lanes".

A polycentric city, according to Moreno, is one where each person can go wherever they want to but don’t need to travel an hour to satisfy a need as they may do currently.