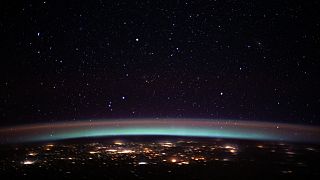 This NASA image obtained March 24, 2020 shows the city lights at the intersection of Europe and Asia as they sparkle underneath an atmospheric glow and a starry night sky.   -   Copyright  HANDOUT / NASA / AFP
By Julie Gaubert  with AFP  •  Updated: 10/12/2021

Did you know that half of the measurements used to predict climate change come from satellites? Or that farmers are able to reduce the use of pesticides thanks to data collected from space?

If you’re reading our wide coverage of the latest news about space, you are maybe already interested in what’s happening a few kilometres above our heads. But for the common public, very few are aware of how European satellites are contributing to your everyday lives.

Some of the biggest names in the French space industry launched an appeal on Thursday to support the creation of a European satellite constellation proposed by Brussels.

Under the name Spacearth Initiative, an ambitious information and communication campaign was launched “to strengthen the useful, responsible and ambitious European space”.

At the beginning of 2021, the European Commissioner for the Internal Market, Thierry Breton, who is responsible for space matters, called for the European Union to rapidly acquire its own constellation, at a time when projects are multiplying across the Atlantic.

What is the Spacearth Initiative?

Some 23 leaders of the French space industry published an open letter, in which they claim they want to defend a certain idea of space: that of a sector at the service of citizens and the environment.

“Each of us uses nearly 40 satellites in our daily lives. However, in the eyes of most people, space is too often reduced to a competition between great powers and billionaires, or to a distant subject of conquest,” the text said.

“This is an initiative that brings together the entire industry, from large groups to start-ups, beyond the competition inherent in commercial activities: it is a real coalition," Franck Poirrier, President of Sodern, a French company specialised in designing and manufacturing space instrumentation, said in a statement.

“But it's not just about communication: it's also a way to perpetuate the industry [which employs 18,000 people in France], to organise ourselves to win and to generate pride,” he added.

“The challenge is, on the one hand, to beat back the unfounded criticisms that are too often made of space in France, and to get away from the caricature that opposes New Space and Old Space,” Jean Marc Nasr, Head of Space Systems within Airbus Defence and Space, said in a statement.

“It is necessary to show the excellence of French and European know-how, to recall that the cost of space activities per individual is minor, and to promote the daily applications that satellites allow”.

The members of this coalition include Airbus, Safran and their joint venture ArianeGroup, as well as Thales Alenia Space, Hemeria, SpaceAble and Gifas, a group of all the top space industry leaders, all of which stand to benefit from new European investment in the space sector.

This initiative by the top French industry leaders also comes just a few weeks before the French presidency of the European Union in 2022 and a few months before the European Space Agency (ESA) ministerial conference in October.

10 suggestions to boost the European space

At the forefront of the proposals put forward are the climate and environmental issues and the question of French and European sovereignty over satellite launchers and applications.

Beyond the European constellation, they would like to see "the development of European space surveillance and multi-orbital identification capabilities by the end of the decade (...) for civilian and military needs".

And still on the subject of sovereignty, the coalition of companies calls for "guaranteeing our access to space in the long term so that we are not the adjustment variable of other major powers," in particular by supporting the Ariane heavy rocket programme.

The members of Spacearth are also urging States to support a mission to measure CO2 emissions generated by human activity, "the Copernicus CO2M mission, which has yet to be financed, in order to get all States to respect international agreements on carbon".