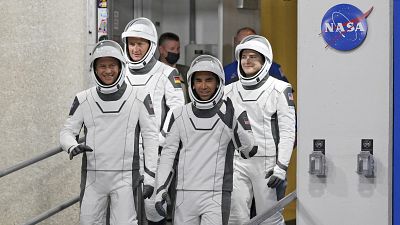 A SpaceX rocket launched four astronauts into orbit on Wednesday night, including the 600th person to reach space in 60 years.

The honour of being the 600th fell to European Space Agency’s (ESA) Matthias Maurer, according to NASA.

He and his three crewmates are due to arrive at the space station in less than 24 hours, more than a week later than originally planned.

One of the astronauts was sidelined last week due to a medical problem. NASA hasn’t said which astronaut it was or the nature of the health issue.

The crewman has made a full recovery, the agency said.

Officials would not disclose whether it was an illness or injury, but said it was not COVID-19.

Who are the members of the SpaceX Crew-3 Mission?

Matthias Maurer, 51, left his research job at a medical company and joined the space agency as an engineer, and made the astronaut cut in 2015, according to AP.

“I think in a very few years, we will see an exponential rise of that one because now we’re entering the era of commercial spaceflight,” Maurer said.

The crew launch marked SpaceX’s fourth for NASA and the company’s fifth passenger flight overall — including a September charter flight for four that skipped the space station.

According to AP, the Dragon capsule’s toilet leaked during their three days in orbit, necessitating a quick redesign of the flushing system in the newest capsule, named Endurance by its crew.

The list of 600 astronauts ranges from those who have spent only a few moments in space - such as Star Trek actor William Shatner last month - to American and Russian astronauts who have spent a year or more in orbit.

The increase in the number of space tourists this year has contributed to this figure.

The figure averages out to 10 people per year since Yuri Gagarin’s pioneering flight in 1961, Maurer noted.

Many of those who have ventured into space have become household names. As the first man to ever go into space, no list of famous astronauts would be complete without Gagarin.

On April 12, 1961, Gagarin was launched aboard the Vostok 1 spacecraft from the Baikonur Cosmodrome, and thus became the first man to go into space.

Valentina Tereshkova was the first woman to go into space. Her shuttle took off on 21 May 1959 when she was only 26 years old, making her the youngest woman in space to date.

Her story has been overshadowed somewhat, with history choosing to remembering Sally Ride, the first American female astronaut to go into space as part of the STS-7 mission in 1983.

Mae Jemison made NASA history as the first black woman in space. She was selected to join the NASA programme in 1987. She participated in the first flight after the failure of the Challenger mission.

Canadian astronaut Chris Hadfield offered one of the ISS’ most iconic moments. In May 2013, 400 km above the Earth, guitar in hand or in zero gravity, he chose an appropriate song to celebrate his departure from station.

Covering David Bowie's iconic hit Space Oddity, the Canadian commander wanted to mark the end of a five-month adventure before returning to Earth.

Last but not least, Frenchman Thomas Pesquet became the youngest astronaut in the history of the ESA at the age of 39 after seven years of technical and physical training.

The tenth Frenchman to go into space, Pesquet has conducted 60 scientific experiments, including the mission #RaiseYourBlob, and carried out two spacewalks to maintain the laboratory in orbit.

He just returned safe and sound to Earth last Tuesday.

As an honourable mention, let’s not forget about Laika, the pioneering space dog aboard the satellite Sputnik 2 in 1957. She rode a rocket into Earth orbit with one meal and only a seven-day oxygen supply.

Laika was not the first animal in space, however. That distinction goes to some fruit flies that the United States launched on a suborbital mission in February 1947.

Working in space: What will the first extraterrestrial job be?