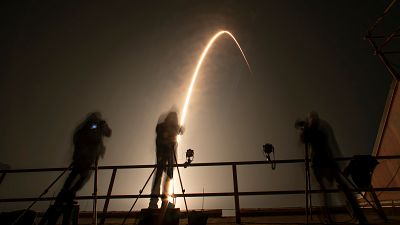 Elon Musk has claimed his rocket company SpaceX is planning to take CO2 out of the atmosphere and turn it into rocket fuel.

The billionaire entrepreneur took to Twitter to make the announcement, adding that the technology will "also be important for Mars".

On Monday, he tweeted: "SpaceX is starting a program to take CO2 out of atmosphere & turn it into rocket fuel. Please join if interested".

The announcement came days after the SpaceX and Tesla founder was named Time magazine’s person of the year.

The magazine called him a "clown, genius, edgelord, visionary, industrialist, showman" in its piece.

The Financial Times newspaper also named him as their person of the year on Wednesday.

There is currently no further information on the carbon capture plans from SpaceX.

How does carbon capture technology work?

One way governments are attempting to offset carbon emissions is with carbon capture methods.

Planting trees, for example, is one way to absorb carbon dioxide.

But technology is also being developed to remove carbon at a major scale and is even currently functioning, such as a carbon capture site in Iceland.

The Orca Plant, which opened in September this year, uses direct air capture technology and is expected to remove 4,000 tonnes of carbon from the air each year.

Filters in massive fans at the plant capture carbon from the atmosphere and store it below ground in basalt rock where it can be mineralised.

It is not yet clear how SpaceX would capture carbon and turn it into rocket fuel. Scientific processes do exist, such as the one used by Canadian company Carbon Engineering, which is making liquid fuel with carbon dioxide from the atmosphere which is then combined with hydrogen from water.

NASA has also developed a method of turning CO2 into fuel using metal oxide thin film devices that coverts the gas into fuel before it is emitted into the atmosphere.

The device can be used in industrial processes, converting carbon dioxide into fuel such as methane, the agency says.

Is this needle-free vaccine the answer to COVID variants?