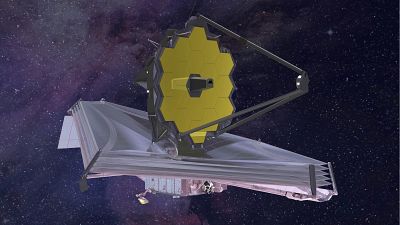 If all goes to plan, on December 22, NASA, the Canadian Space Agency and the European Space Agency will launch the most ambitious, powerful and complicated space observatory ever built into outer space - some 1.5 million kilometres from Earth, to be exact.

The Big Bang, exo-planets, extraterrestrial life forms and how stars are formed are just some of the mysteries that Webb could unlock if the mission succeeds.

The space observatory has been designed as a successor to NASA and ESA’s Hubble telescope - the largest and most powerful telescope currently in operation - but this new iteration is a significant upgrade on its predecessor.

Unlike Hubble, which operates in low Earth orbit (LEO), James Webb will be launched to what is known as Lagrange point 2, or L2, where it will orbit the sun 1.5 million km from Earth.

This vantage point, as well as the infrared capabilities of Webb, will allow scientists to peer further and deeper into the cosmos than we have ever been able to before.

"The further we look, the more we go back in time, closer to the origins of the universe and therefore the Big Bang," Raphael Chevrier, Head of Bid Management and Innovation for Arianespace, told Euronews Next.

The French aerospace company will be providing the Ariane 5 heavy launcher that will carry the James Webb telescope into space from the ESA launchpad in French Guiana.

"Webb will be able to look at the formation of the first galaxies, primitive galaxies, and see how they have evolved in time," he said.

The particularity of James Webb is that it can look very far into the universe. The further we look, the more we go back in time, closer to the origins of the universe and therefore the Big Bang.

When the telescope is strapped to the European-made rocket and blasted into orbit, it will be carrying the hopes of over 10,000 people from 17 different countries who worked on the project.

If successful, it will be the culmination of 25 years of hard labour.

There’s also the enormous cost of the project to consider.

In 2014, NASA projected the mission to cost €4.3 billion but this has ballooned to over €9.5 billion. That’s without factoring in the estimated €700 million contributed by ESA or the €200 million estimated from the CSA.

Suffice to say, there is a lot riding on this mission.

How will the James Webb Telescope get 1.5 million km from Earth?

Before the telescope can tell us more of the universe’s secrets, everything will hinge on a successful take-off later this month.

"The launch will last 27 minutes which is the time needed for the Ariane 5 to really catapult Webb into space. From that point, it will really be the beginning of the adventure," Chevrier said.

The telescope has been built with 12 rocket thrusters so that it can course-correct post-launch, reposition itself and maintain its prescribed orbit in space.

A few minutes after the telescope separates from the rocket, it will deploy its solar panels and undergo a kind of "birth" in space as it unfurls from its launch capsule.

All told, it will take the telescope 29 days before it can insert itself into orbit at L2.

How will the telescope work once in orbit?

During its journey it will deploy its primary 6.5-metre gold mirror, its secondary mirror and a five-layer sunshield which is roughly the size of a tennis court and essential to the telescope’s operation.

"The sun shield will allow [the telescope] to go from 85 degrees to minus 233 degrees because the telescope needs to be in extremely cold conditions to work properly," Chevrier explained.

For Webb’s Mid-infrared Instrument (MIRI) to work, extremely cold and stable conditions, like those found at L2, are required to ensure the instrument’s own heat radiation does not interfere with the telescope’s cosmic infrared readings.

MIRI has been designed to detect the birthplace of stars and also molecules like water, methane, carbon dioxide and rocky minerals commonly found on Earth.

If there are other lifeforms in the universe or other habitable planets, it could very well be MIRI that reveals them.

As it stands, the telescope has already passed a few delicate terrestrial hurdles in its mission. It arrived in French Guiana from California after 16 days at sea in October.

And it finished a delicate 10-day fuelling operation earlier this month.

All is set for the nail-biting launch of what Chevrier calls the "project of the century".

"Today, the launch is scheduled for December 22 at 9.20am in Kourou. Everything is ready, everything is in order to keep this engagement," Chevrier said.

"So I hope that we will be able to launch before Christmas and that we can all watch this absolutely exceptional moment".

Astronauts train for life on Mars with rocks on Earth