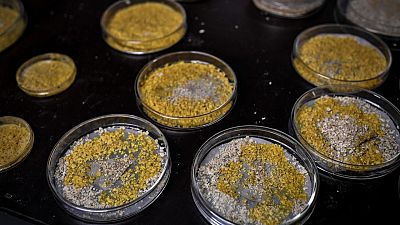 Thousands of "Blobs" - strange creatures formed from a single cell - have landed in more than 4,500 schools in France where they will be the subject of an experiment orchestrated from space by French astronaut Thomas Pesquet.

Blob appeared on Earth over 500 million years ago and was considered to be a fungus for a long time. Better known as "slime mould," its scientific name is Physarum polycephalum.

When Pesquet rehydrates them on board the International Space Station (ISS), four sclerotia of about 0.5 cm in size are supposed to react in Petri dishes 400 km from Earth.

The goal is to observe the effects of weightlessness on this organism compared with those being tested by students on Earth.

Thousands of students across France, between 8 and 18 years old, are excited for D-Day.

As soon as they received their "blobs kits" at the start of the school year, teachers started breeding and discovered with fascination this living being, responding to the scientific name "Physarum polycephalum".

The creature consists of only one cell and several nuclei, which can multiply.

Similar to a yellow spongy mass, it has no mouth, stomach, legs, or brain and yet eats (a lot), moves (slowly), and has amazing learning abilities.

The blob can divide at will, merge with others, and become dormant when dehydrated, making it virtually immortal.

Audrey Dussutour is leading the school project and is a research director at the CNRS in Toulouse.

Dussutour has spent almost more time supporting teachers to prepare for the experiment #ElèveTonBlob (Raise your Blob) than carrying out her own research.

"I spend four to five hours a day responding to teachers on the Facebook page 'Raise Your Blob' dedicated to the operation," the biologist says.

She recently won an award for mediation from the CNRS, which rewards scientists or research support staff for their activities promoting science in society.

The Blob was named after a 1958 horror film starring Steeve McQueen, where a slimy alien creature invades Earth.

"I told my students that I didn't know much about blob either, even though I studied biology for five years. That's what I find fascinating in this project: we learn together," Emmanuelle Bohbot, primary teacher in Paris, told AFP.

The classes gradually turned into mini-laboratories. It was first necessary to wake up the dried blobs (scientifically called sclerotia) with a few drops of water, place them in Petri dishes, protected from light, on an agar bed so they could develop.

Some got off to an upsetting start.

"Our first batch turned moldy, because we had not changed the agar enough," Alexandra Da Paz, who teaches at the Paul-Bert elementary school in Saint-Mandé (Val-de-Marne), said.

This little mishap allowed her to explain to her students that the blob,even though it was almost immortal, "was not invincible".

Compared to the usual farms of stick insects or snails, the unicellular organism shakes up the usual experiments conducted in classrooms. "Some people have science fiction images in their heads, of a yellowish thing that will jump in their face," said Bohbot.

On the Facebook group where more than 7,000 teachers exchange advice on their physarum polycephalum, a competition was started to find the best name for their creatures. "Blob Marley," "Blob Dylan" or "Bloby-Wan Kenobi" made the list.

They also exchange any kind of questions, ranging from "Can we put it in the compost?" to "How do I remove the mist from the boxes?"

A teacher even posted a video of an attempted blob tasting - but quickly spat it out.