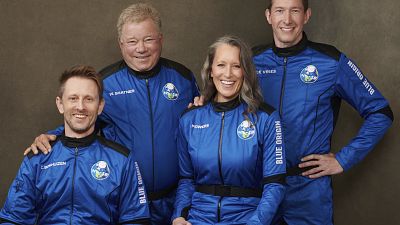 Star Trek's Captain Kirk, played by Hollywood star William Shatner, touched down in the desert after his first real-life space flight onboard the Blue Origin sub-orbital capsule on Wednesday.

The 90-year-old became the oldest person ever to enter the final frontier after he lifted off from the Blue Origin Space Company's headquarters in rural Texas.

In a press conference last week, Shatner revealed he had never even really thought about travelling into space, despite all those years playing the fearless commander of Star Trek’s USS Enterprise.

"I'm really excited about the launch and a little bit nervous too," said Shatner, who has been in training for several weeks – or as he put it, in rehearsals.

The 10-minute, fully automated trip was the second passenger flight from Jeff Bezos' Blue Origin and should be similar to the inaugural space launch of July.

The three passengers experienced a short period of weightlessness of about four to five minutes as the capsuled climbed to a maximum altitude just above 100 km above sea level.

"There is this mystique of being in space and that much closer to the stars and being weightless," the Canadian star said.

"It’s time Captain Kirk actually physically got up into space. I’m kind of excited about that," said Becky Brewster, mayor of Van Horn, where the Blue Origin spaceport facilities are located.

Bezos, who is a big Star Trek fan and who once made a cameo appearance in one of the movies, invited Shatner to take the flight as a guest and was also a guest crewmember on the flight.

Shatner plans to get right back to his work as Captain Kirk once he's back down to Earth.

Jeff Bezos, the 57-year-old Amazon founder and the world's richest man, is in a tight and competitive race with his fellow billionaires Richard Branson and Elon Musk, CEO of Tesla Motors, in a bid to develop the most viable space tourism company.

The billionaires hope to make space tourism a viable industry for ordinary civilians in future generations.