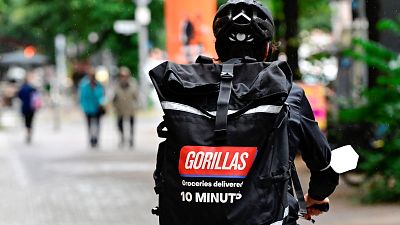 Ten-minute grocery delivery company Gorillas has allegedly fired hundreds of its riders for taking part in a series of wildcat strikes in Berlin last weekend.

The Gorillas Workers Collective, which represents the company's non-unionised delivery workers, told Euronews Next that 350 riders had been dismissed by the company for their involvement in the strikes.

Gorillas confirmed to Euronews Next that it had fired workers who took part in the strikes, but refused to say how many had been dismissed.

"We are compelled to enforce our rights in accordance with the existing legal framework and have decided to dismiss the employees who actively participated in these unauthorised strikes and blockades," the company said.

Under German law, strikes are not legal unless sanctioned by a recognised trade union.

"Tuesday morning, people started to get fired one by one, first with a call that told the workers they got fired because they were striking and then with a termination letter," a representative of the Collective told Euronews Next.

Gorillas' move to sack the striking riders, who by law are employees and not independent gig workers, represents a change in tactics for the company, founded last May, which has faced intermittent strike action in Germany since February this year.

The Berlin-based startup has long faced allegations of poor pay and working conditions from its riders, who allege that the company frequently makes mistakes or is late with payments, that bikes and safety equipment are poorly maintained, that work schedules leave little time between shifts and that Gorillas warehouses are chronically understaffed.

We had to terminate one of our riders. Apparently he was unionising, now they make big buzz on Twitter

In response, the company said it worked quickly to rectify payment errors and had hired "an important number" of riders to ease staffing issues.

It also said it had introduced a new bonus system for riders as well as a new "rider kit" and safety equipment, although a representative of the Gorillas Workers Collective told Euronews Next that they were not aware of either of these changes.

Earlier this week, the Gorillas Workers Collective published a leaked Slack conversation which appeared to show company CEO Kağan Sümer seeking advice from colleagues about firing a worker who was trying to form a union.

"We have an emergency. We had to terminate one of our riders. Apparently he was unionising, now they make big buzz on Twitter. Good morning :(," Sümer wrote.

Gorillas head of rider operations Nicolas Betancurt gave more context to the rider's sacking, saying "he asked the riders to strike and not to deliver any orders".

The company has confirmed that the leaked screenshot was real.

Wildcat strikes 'not allowed in Germany'

The Gorillas Workers Collective - which is currently trying to form a works council at Gorillas - said it was able to get the sacked rider reinstated after proving the company had made a formal error in terminating them.

Despite this, a Berlin union representative told Euronews Next that it may prove difficult to achieve the same outcome for the riders fired this week.

"Unfortunately, Gorillas is right. 'Wildcat strikes', political strikes or general strikes are not allowed in Germany. Anyone who takes part in such a strike risks being fired," Andreas Splanemann from the Verdi union said.

"We condemn that the employer dismissed the strike participants. However, it is to be feared that labour courts will also recognise the dismissals as legal if formal errors have not been made," he added.