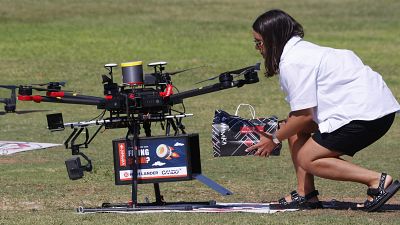 This picture taken on October 11, 2021 in the Israeli coastal city of Herzliya shows a woman loading goods into a drone as it carries deliveries during Drone Intitiative test.   -   Copyright  JACK GUEZ/AFP
By Euronews  with AFP  •  Updated: 20/10/2021

Three drones, loaded with sushi and cans of beer, buzzed over the skyscrapers of Tel Aviv, before descending onto seaside landing areas during a demonstration on October 11.

The exercise, organised by High Lander and CanDo, two leading companies in the d sector, was part of a 20 million shekel (about €5,4 million) project to promote Israeli drone technology.

"The idea is not to fly one drone, but several from different manufacturers, controlled by our software and that we make sure they don't collide," High Lander CEO Alon Abelson told AFP.

Daniella Partem, who is in charge of the project at the Israeli Innovation Authority, said she imagines "thousands" of drones flying simultaneously in the crowded cities of the future, delivering everything from medicines to takeaways, but also supporting police missions by taking photographs, for example.

"Our goal is to create a competitive market in Israel that is not dominated by one company," Partem said.

"If we can take vehicles off the roads and put them in the air, we can affect traffic, we can reduce air pollution (...) we can create a better and safer environment for deliveries," she added.

Drone expert Michael Horowitz, a political scientist at the University of Pennsylvania, told AFP Israel is developing "civilian analogues" to military drones, which are becoming smaller and more capable of travelling in groups.

"If an Israeli company develops an efficient local system for commanding and controlling drones, capable of including drones from different companies, it can potentially interest a lot of people," he said.

He said advances in civilian drones could help Israel regain market share in the drone sector as rivals China and Turkey nibble away at its military drone exports.

High Lander's Abelson said he has customers around the world, including Japan, South Korea, France, the United States, Israel and African countries.

To fly one drone is not an issue, explained Abelson.

“You just give it a sterile area and that's it,” he said.

“We are talking about multi drones that actually communicate between themselves. They are not communicating between themselves because they come from different drone manufacturers, but still, they are monitoring with our software and we can make sure they don't collide - landing safely and everything. Exactly like an air traffic controller."

Hadas Aharoni, 22, a controller for the drone company Airwayz, monitors dozens of autonomous drones flying over the northern city of Hadera from a control room in Tel Aviv, about 50km south of the capital.

"We can see the flight paths where the drones take off and land, their height, their battery levels and all sorts of problems we have to solve to get the drones to their destination," said Hadas Aharoni.

So far, its drones have only carried out training missions.

"We are making sure that this system will be safe for the future when there are more flights," Aharoni added.

Ice falling from the sky

Israeli companies seem to be on board with several experimenting with this new delivery method, such as sushi chain Japanika and ice cream chain Golda.

For a week, the latter opened a pop-up shop on the beach in Tel Aviv, offering customers to scan a QR code and order ice cream delivered by drone.

For Talya Marder, Golda's marketing manager, the added value of drones is obvious.

"In less than ten minutes, you can get your order, which you can't do with ordinary vehicles," she said.

Defibrillator drones aim to beat paramedics to save cardiac patients

China's Amazon says delivery bots are the future. Here's why