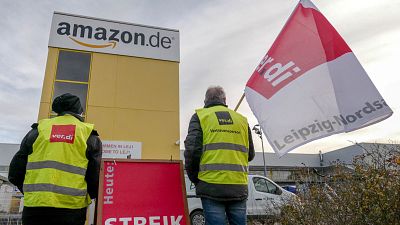 The controversy between Verdi and Amazon over the collective labour agreements has been ongoing since 2013   -   Copyright  Peter Endig / dpa / AFP
By Tom Bateman  •  Updated: 01/11/2021

Workers at seven Amazon locations across Germany will go on strike this week in an ongoing dispute over pay and conditions at the online retail giant.

On Sunday, Germany's second-largest union called for Amazon warehouse workers to walk out on November 1 and 2, accusing the company of failing to meet industry standards for wage increases.

"It is unacceptable that a multinational corporation worth billions earns itself silly and yet refuses to give its employees the wage increases that other companies in the industry pay their colleagues," said Orhan Akman from the Verdi trade union.

In a statement to Reuters, Amazon defended the wages it pays its workers in Germany.

"No one here earns less than €12 gross per hour plus extras," the company said. The minimum wage in Germany is €9.60 an hour.

"Under the pressure of the strikes, Amazon has increased wages several times in recent years. Despite this, Amazon still pays its employees less than comparable companies covered by collective agreements," Akman said.

A staff walkout on Monday in Leipzig and at two Amazon sites in the town of Bad Hersfeld would be followed by strikes in Werne, Rheinberg, Koblenz and Graben, Verdi said in a statement.

The union called the strikes over Amazon's refusal to recognise local collective agreements that apply to workers in the retail and delivery sectors.

Last year, a Verdi-backed strike saw around 2,500 German Amazon workers walk out on Black Friday in an effort to disrupt the company's operations during the November event.

Germany is Amazon's second-largest market. In March, the company announced it would hire 5,000 more staff in Germany, bringing Amazon's total permanent staff in the country to around 28,000 people.

Revealed: The best places to work in Europe in 2022