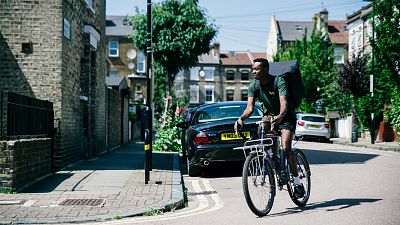 So a group of ex-Deliveroo and Just Eat drivers got together and decided to do things differently.

Wings is a rider-owned co-op based in Finsbury Park in central London. It works much like Deliveroo, but one important difference is that it only delivers for local independent restaurants.

Silvio Mingaj, 18, and his family moved from Athens to London in June to set up a Greek restaurant. Their restaurant, Hellenic Grill, was the second to sign up to Wings.

Many studies on the air pollution caused by companies like Deliveroo suggest Silvio is right. One study found that cars and motorbikes emit five and 11 times more greenhouse gases per meal delivery than bicycles respectively. Because Wings only delivers locally, all orders can be made by bicycle.

Rich Mason, 32, the founder of Wings and a former Deliveroo rider, believes businesses should be doing all they can to halt global warming. “It’s an emergency at this stage. It’s incumbent on all businesses.”

But companies like Deliveroo are doing the exact opposite. They use criteria on their shift booking systems to prioritise couriers using motor vehicles, meaning fewer deliveries are being made by bicycle.

Rich hopes that delivering by bike starts a broader conversation about food production and consumption. “Even putting the delivery element aside, it’s a big emitter.”

Delivering by bike is just the beginning, he says. “No polluting vehicles is a no-brainer. Now we’re looking at plastic packaging. We’re in talks with the local council and businesses to roll out a scheme of renewable packaging.”

Yunus, 18, started working at Wings after leaving the national food courier Just Eat. He explains that Wings deliveries are on average half the distance of Just Eat deliveries, and why this is better for his health and safety.

“​​With Wings, I’m looked after,” Yunus says. “Just the other day, I did five orders in the space of an hour, and I was tired. Rich said I could take a break, and that he’d take any orders that came in. It was quite rainy and I was drenched. I went inside, had a cup of tea and dried off. He provided me with that facility.

“With Just Eat I wouldn’t have got the rest. I could have had hypothermia, or been involved in an accident,” he says. “If we’re tired we can’t accelerate and we can’t move out of the way. We are the engine.”

If we’re tired we can’t accelerate and we can’t move out of the way. We are the engine.

Wings has restored many worker protections which were lost in the gig economy. It guarantees riders a London Living Wage (£10.85 per hour), for example, by limiting the number of riders on the platform until more restaurants sign up.

Deliveroo classifies its riders as freelancers, meaning it doesn’t guarantee them a minimum wage. It also doesn’t cap the number of riders on its platform, and laid-off hospitality workers were joining the company in droves, so riders can be paid as little as £2 an hour.

A vast army of workers - with very few rights

Many gig economy giants across the continent are pursuing the Deliveroo model of doing business. Across Europe the gig economy now employs a vast army of workers. Around 11 per cent of the EU’s workforce - 24 million people - have provided services for platforms at least once.

This business model has provoked deep antipathy among locals. In Silvio’s home country Greece, news broke earlier this month that food delivery giant Efood had tried to force its contract-based workers to become freelancers. They were told to agree to be paid per delivery or be fired, sparking a huge customer backlash.

Riders set to strike across Greece after viral #Cancel_EFood campaignhttps://t.co/MzXVyEzhzI#Greece#gigeconomypic.twitter.com/laUzfdmUDv

Silvio believes the Efood scandal demonstrates there’s potential for the Wings model in Greece. “Wings could definitely work in Athens. Greece needs to go back to the simple times. It would bring people closer, especially now during hard times.”

Delivery workers protest outside the Labour Ministry in Athens after #efoodgr, an online food delivery platform, decided to turn their contract-based workers into freelancers and since then created a social media backlash (#cancel_efood)
pic.twitter.com/GuSJrks2Rl

And it’s not just Greece that has an appetite for a fairer gig economy. Across Europe, from Germany to Spain, there’s a wave of courier co-ops coming for the gig economy. Greece could well be the next.

‘The riders respect us’

For Silvio, it’s clear Wings riders are treated better than counterparts at the gig economy giants. “I can see it for myself, they know how to treat people. They have respect for riders which other businesses don’t.”

This has a positive impact on how the riders interact with him and his family. “They come inside, they speak with the chef and staff. They greet us. They don’t just come inside rudely. Meanwhile other riders from Uber Eats, they come in in such a rude way and act as if we owe them something. They speak to us as if we were animals.”

“The riders respect us and understand that, when it’s busy, the order is going to take one or two minutes longer to prepare.”

Silvio told us that Wings was a key part of getting his business off the ground.

“We were waiting on our hygiene rating, and we couldn’t get hold of anyone at the council. Rich was the only person who actually sat down and helped us, despite all the pressure he was under. We are now in the waiting line thanks to him. No one else could do that.”

This example shows the potential infrastructure courier co-ops could offer to communities across the world.

“What would be exciting is to have a worker co-op that’s also owned by the restaurants,” Rich says. “It would be totally owned by the community. An infrastructure to deliver whatever we need or want sustainably.”