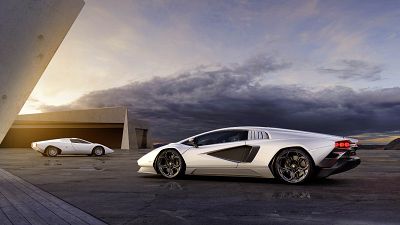 Perhaps sensing a shift in consumer priorities, luxury car manufacturers are turning their attention to electric and hybrid models to boost their green credentials.

Lamborghini, Rolls Royce and McLaren were among the brands eager to prove that fast, powerful and very expensive cars could also be more environmentally friendly at the annual Quail motorsport event in California.

Kai Lermen, CEO of The Quail, thinks this is only the beginning of the shift to luxury electric vehicles (EVs).

“I think we're going to see more streamliners coming in with either electric or with hybrids or with some kind of new technology that will fill the need of the broader market," he said.

“I think we're going to see more advancements in that area to be more efficient, to get longer ranges going for the cars.".

To boost these figures, US president Joe Biden recently announced a commitment from the auto industry to produce electric vehicles to account for as much as half of US sales by the end of the decade. However, critics point out that the commitment isn’t legally binding.

The state of California has gone a step further, however, with Governor Gavin Newsom mandating that all new cars sold must be electric vehicles by 2035.