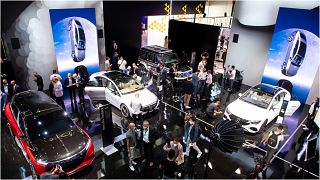 Electrification, autonomous driving, and the semi-conductor shortage have created a perfect storm that needs to be tackled by the industry.

There has been some criticism that the German car makers were not switching to electric engines fast enough, allowing car manufacturers like Tesla to grab a large market share.

Environmental activists from Greenpeace immersed themselves in the cold water of the lake in front of the congress centre where the Munich IAA Mobility Fair is taking place, calling for real action against the climate crisis. Several major car manufacturers - including Renault, Volkswagen, Mercedes and BMW - are presenting new prototypes and models at the Fair.

The i Vision Circular is a compact electric vehicle set for sale in around twenty years time.

It's made almost entirely from recyclable materials and it's been designed to make it easy to break down and be recycled again at the end of its life.

Another German giant, Daimler is showing a Smart concept car, called the Smart #1 and a fully electric concept of the G-class, the EQG concept.

French carmaker Renault is launching the Megane E-TECH at the IAA.

It will be produced at the manufacturer's plant in Douai, northern France, which Renault has dubbed 'ElectriCity', its electric hub.

Renault says it has designed the car to give more internal space, lengthening the wheelbase to 2.7 metres, with the total length standing at 4.21 metres.

The shape of the car with its sloping roofline is intended to make the vehicle more aerodynamic.

It has a very thin battery, just 110 millimetres in height.

With the 60 kWh battery, Renault claims a range of 470 kilometres.

It also says charging will be fast for those driving long distances.

South Korea Hyundai is showing an autonomous concept of a "Robotaxi" based on the company's Ioniq 5 concept.

But all the high-tech self-driving cars rely on one thing that is in short supply - semiconductors.

The IAA show is taking place in Munich for the first time, it was previously held every second year in Frankfurt, alternating years with the Paris motor show.

There are strict rules in place, each visitor will have to show either a negative coronavirus test, a proof of vaccination or proof of having recovered from coronavirus.

Everyone also needs to wear a facemask when moving around the venue.

The IAA mobility show opens to the public on September 7 and runs through September 12.