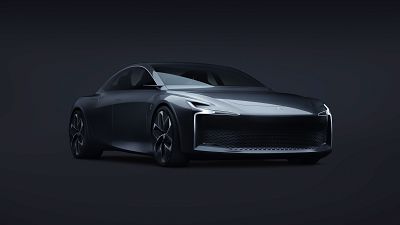 French company Hopium has designed a sleek hydrogen-fuelled sports car that it hopes could take on Tesla in the zero-emissions vehicle race.

Led by French racing driver Olivier Lombard, Hopium unveiled a prototype for its luxury car, the Machina, in June. The 100 per cent hydrogen-powered sedan has 500 horsepower and a range of 1,000 kilometers, the company claims.

But prospective customers face a wait, as the car won't be available before 2025 at the earliest.

“It’s true that we are compared a lot with Tesla and our ambition is to have a higher-end car and to try to have a big experience for the driver using hydrogen,” Lombard told Euronews Next at the VivaTech 2021 conference in Paris.

“But I don’t know if we can be compared to Tesla. I think each company has its history, however, I think it can be some inspiration,” the 30-year-old said.

Hopium has so far produced a single prototype of the Machina, the Alpha 0. Deliveries of the production version of the Machina are estimated to begin in 2025, with the company currently accepting deposits for the first 1,000 cars.

The sports car relies on hydrogen, the most abundant element in the universe. Hopium calls it the “future of the world”.

The Machina's fuel cell system transforms oxygen and hydrogen into electricity and emits nothing but water.

With electric vehicles, everybody says it's not noisy. But with the hydrogen, you really have a sound experience and it's amazing.

Hydrogen fuel cells do not store electricity like a battery. Instead they draw hydrogen from a tank that can be refilled just a matter of minutes.

Lombard said a high-end electric car could have a battery weighing some 600-700 kilos. A drawback of EVs is that the batteries contain elements like lithium and cobalt, which are extracted through environmentally harmful mining.

Lombard said the Machina's fuel cell contained fewer "bad materials". It was unclear whether the same could be said for the "buffer battery" built in to Hopium's planned vehicle.

For Lombard, who drove the protoype for the first time in June, he said the ride also feels different to its electric battery rivals.

“It's very interesting with the sound, because [with] electric vehicles, everybody says it's not noisy, but with the hydrogen, you really have a sound experience and it's amazing,” he said.

But hydrogen vehicles are not quite ready to take the title of the car of the future. Hydrogen stations are few and far between. In Europe, there are barely one hundred of them and the United States has half that amount.

Hopium does not have the same means as Tesla to develop its network of charging stations. Lombard is therefore counting on countries to support the rapid development of stations.

It's been a slow process. There are roughly 450 hydrogen fuelling stations worldwide. Just 34 of them are in France.

The economic and environmental cost of hydrogen

While hydrogen is plentiful, it's highly reactive and only exists in nature in the form of a compound with other elements.

That means producing it has an environmental cost. It takes energy to produce pure hydrogen from sources like water or natural gas.

Today, the majority of hydrogen fuel comes from the process of natural gas reforming. But climate change-causing by-products such as carbon dioxide and carbon monoxide are produced through this process.

"The cost of producing hydrogen from renewables is primed to fall, but demand needs to be created to drive down costs, and a wide range of delivery infrastructure needs to be built," a Bloomberg NEF report said.

"That won’t happen without new government targets and subsidies."

I think it's very important to be able to aggregate all the people around the project and to have this direction and go for it.

The French company is not the first carmaker company to bet on hydrogen. Japanese manufacturer Toyota has led the charge with the Mirai, the first mass-produced hydrogen car.

But Lombard has his ambitions set high. Asked what markets he wants to dominate, he replies “the world”.

“We are based in France, which is very important because there is a very interesting know-how… in France about the technology. But commercially speaking, we want to be worldwide very quickly," he said.

He also said as hydrogen has a variety of energy uses, such as the ability to heat up a house or power a motorbike the company wants to "open the way for hydrogen and show it to the world through La Machina."

A match for Musk?

But can racing driver Lombard be a match for Elon Musk, the world's richest man?

“I think it's true that sport brings a lot,” he said.

The FIA World Endurance Championship driver said racing also gave him the ability to bring people together as a team.

"In racing, it's a team we have one goal, one objective, and everybody wants to reach it.

"I think it's very important to be able to aggregate all the people around the project and to have this direction and go for it.”