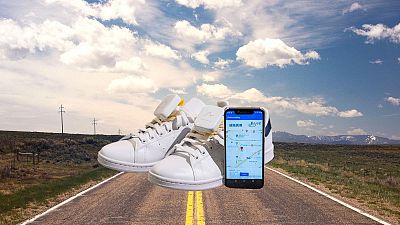 A Japanese startup has created an innovative new way to support people who are visually impaired with navigating - through vibrating shoes.

The futuristic gadget is made up of a vibration device that wraps around the foot. With the help of a smartphone navigation app like Google Maps and motion sensors, it can guide the user along their journey by sending prompts they feel through their foot.

The company claims the system could be widely available as soon as 2022.

The device functions via smartphone. Once users input a destination on their phones, the device vibrates to provide navigation.

The company claims the system frees a person with low vision from having to focus on finding directions with their phone in hand or asking people on the street for help. Instead, they can focus their attention on their surroundings.

What was the inspiration?

The idea came about after Ashirase CEO Wataru Chino suffered a family tragedy. His wife’s grandmother, who had limited vision, slipped and fell to her death while walking near a river. This motivated him to find ways to make it safer for visually impaired people to navigate independently.

There are estimated to be over 200 million people with moderate to severe visual impairments globally. It is expected that this number will rise substantially in the coming years as the world’s population grows older.

The impact of COVID on visually impaired people

An unexpected consequence of the COVID-19 lockdowns was that moving around for visually impaired people became more difficult.

The normal sounds, traffic patterns, and even smells changed as many businesses were forced to shut and more people stayed at home. This also meant that fewer family members and paid helpers were available to get people safely to their destination.

This new device is not supposed to replace other tools of getting around for visually impaired people such as canes, but is designed to supplement them and make it easier and safer, Ashirase said.

A pilot of the beta version, planned for October or November this year, will allow a select group to try out the device for a week on a trial basis to generate feedback data. The company hopes the product will be ready for wider release in October 2022.

Could this South Korean sleep technology be the stuff of dreams?