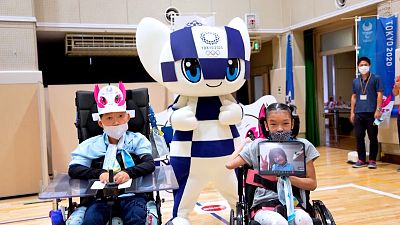 With spectators largely banned from this year's Olympic games in Tokyo, enthusiasts have had to come up with novel ways to virtually bring fans of all abilities as close as possible to the action.

With support from major Japanese companies, students at the Bokuto School for Physically Handicapped in Tokyo were able to participate in the games via a virtual reality viewing dome set up in their school gym.

The kids were also afforded the chance to ‘meet’ athletes through a camera and play with an Olympic mascot robot provided by Toyota Motor Corps.

Shinya Shoji, the Principal of the school said he hopes the success of the event will open the doors for other similar ones in the future.

"As we can hold this event here, this can be held anywhere in the world,” he said.

“That's the message I want to tell. There are some unfortunate things as no spectators are allowed at venues but I think it's really amazing that we can feel like we are watching the Games in the stadiums thanks to technology".

How can therapy involving horses help people with disabilities?