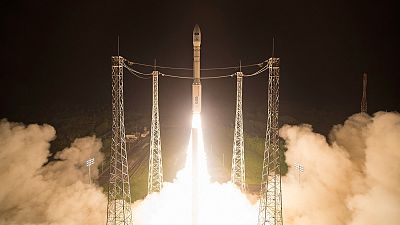 For four decades, the Ariane rocket has been a jewel of European space technology. But since the founding of Elon Musk’s SpaceX in 2002, the bloc has had to fight to try and keep its crown.

Arianespace was the world’s first commercial launch company and used to dominate the market for sending big communications satellites into orbit. But it’s now shifting its focus to smaller satellites, which in turn is attracting start-ups.

Last year, Arianespace’s Vega launcher completed the first European "rideshare" mission for small satellites with 53 satellites for 21 customers on board.

The launcher, which is part of the European Space Agency (ESA) programme, is tailored to carry small scientific spacecraft but in order to share the launch cost, it offers the service to private companies as well.

"We are moving on from a sector of launching, which was mostly geostationary satellites for 30 or 40 years to what is now called the new space," Marino Fragnito, Arianespace’s senior vice-president and head of the Vega Business Unit, told Euronews Next.

"We're moving on from the old space to the new space".

Why do we need satellites?

Space is full of new opportunities for a new kind of business to help life on Earth.

"Start-ups are looking for opportunities in space because space is the new frontier," said Fragnito, who added start-ups from the US are now also using the Vega launcher.

It’s communication and Internet of Things companies, however, that are the biggest sectors showing a real interest in space satellites, he explained.

"Space is full of new opportunities for a new kind of business to help life on Earth".

But Arianespace is not the only company to offer such a service.

SpaceX is leading the market for tech companies with its Falcon 9 rocket and has made satellite orbiting much cheaper. Since 2018, it has been launching batches of small satellites into orbit in order to form what is called a “constellation” to provide instant broadband on Earth.

According to the World Bank, there are nearly 3,000 active satellites circling our tiny planet.

The number is expected to jump by 230 per cent by 2025, according to experts at the Massachusetts Institute of Technology (MIT).

Europe’s rocket production is not as competitive as compared to the US due to European governments and institutions not producing enough volume.

"The fact is that the US has human space flight now through SpaceX and we don't have it in Europe," said Fragnito.

Another issue, Fragnito said, is that Europe is not as strong on communicating its vision and that the bloc definitely needs its own Elon Musk to articulate its aims.

"Elon Musk is very good at communicating. Maybe we should be more pressing on social media and television and communication, in general, to try to explain what we do, and what we are also offering to this new space market".

He admits SpaceX is pushing the price down for access to space, which has forced the company to offer low-cost alternatives. But the French company has something else to offer.

"We also have something that I think distinguishes us from SpaceX and from other competitors, which is customer care," he said, adding it was the most important factor.

Despite the setbacks, Fragnito is confident Europe can compete with the US in the space industry.

"We were leaders in the market for geostationary services. We are going to be a leader in the market, with our services like this SSMS".