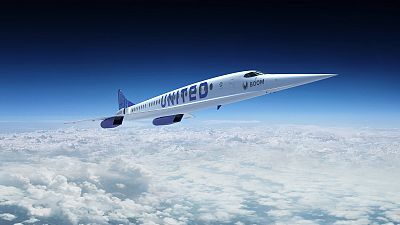 If they take to the skies as planned in 2029, the Boom Overture jets would be the first supersonic aircraft to fly for a commercial airline since Concorde's retirement in 2003.

United is the first US airline to place an order for the jets which promise to cut flying time to over 500 cities by half, according to the airline.

In a statement, the airline said it had agreed to buy up to 50 of the Overture jets – an initial 15 plus a potential further 35 – pending proof the aircraft "meets United's demanding safety, operating and sustainability requirements".

"United continues on its trajectory to build a more innovative, sustainable airline and today's advancements in technology are making it more viable for that to include supersonic planes," United CEO Scott Kirby said.

United continues on its trajectory to build a more innovative, sustainable airline

Overture maker Boom claims that the aircraft will have net-zero carbon emissions and will be capable of flying on 100 per cent sustainable aviation fuel (SAF), which is produced from sources like waste products.

Boom also claims the aircraft – which has yet to be built – will be able to transport passengers at roughly twice the speed of current commercial jets. That would cut flying time from London to New York to 3.5 hours and Tokyo to San Francisco to roughly 6 hours.

Speaking to aviation industry website The Air Current, United Airlines' head of corporate development Mike Leskinen said the airline had paid a deposit for the supersonic jets and that the agreement with Boom contained financial protections for United.

"This is an order, but to call it a firm order is inaccurate," Leskinen said.