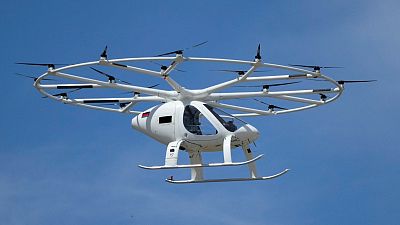 A flying taxi set to transport visitors to the 2024 Paris Olympic games made its first test flight on Monday.

The autonomous Volocopter 2X flew for four minutes at Le Bourget airport near the French capital.

Local authorities, public transportation companies and airport authorities in Paris are cooperating with the German manufacturer to provide an air taxi solution for the Olympic games.

"We have started our test flight campaigns, and we will do whatever it takes in the coming months and years to fulfil all requirements by the public, by the politicians, but also by the regulators, to bring air taxi services to life here in Paris," said Volocopter CEO Florian Reuter.

Air taxis for everyone?

Volocopter says its goal is to make local air travel affordable. The company claims that a ride in one of its autonomous drones will cost a similar amount to a trip in a conventional taxi today.

"We work to really integrate this at scale with other modes of transportation, to make it affordable and accessible to everyone. Everyone taking a taxi today shall be able to use a Volocopter on selected routes," Reuter said.

Once launched, passengers will be able to hail an air taxi via an app on their phones.

The autonomous vehicles won’t be able to take off and land just anywhere, though. Specialised landing pads will need to be set up around Paris before passengers are able to take to the skies.