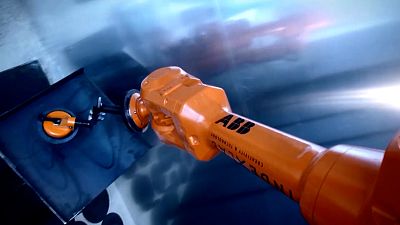 Despite the huge strides humans have made in the fields of and robotics in recent years, the construction industry has lagged behind other sectors in introducing automation on a large scale.

But according to a survey commissioned by Robotics firm ABB, 91 per cent of construction businesses in Europe are predicting a skills crisis by 2030, meaning the industry is increasingly setting its sights on robots to build the homes and offices of the future.

"The construction industry is at a tipping point," said ABB executive Sami Atiya.

"On the one side, [there’s] a growing market driven by growth, population, urbanisation - So needs for building; On the other side, a huge structural shortage of labour and skills".

"The answer lies in robotics automation," he added.

According to Atiya, a new emphasis on health and safety and sustainability in the industry is also focusing investors’ minds on robotics.

In collaboration with ABB, Austrian architecture firm MAEID is showcasing the latest large-scale 3D printing technology for the industry at the 2021 Biennale Architettura in Venice opening on Saturday.

"During the entire duration of the Biennale, robots will take care of the installation; watering the seeds, monitoring the environment through advanced technology, sensoring and artificial intelligence," he added.

It is hoped the installation will inspire future architects about the broad possibilities of automation for revolutionising the construction industry.