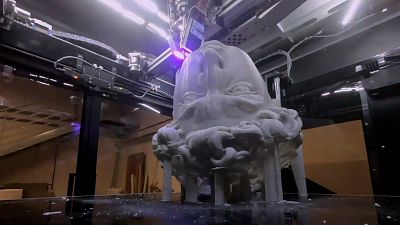 Michelangelo’s majestic 17-foot-statue has stood in Florence’s Galleria dell'Accademia since 1873.

But a new project involving a team of engineers, technicians, and restorers hopes to bring the most faithful, sophisticated replica ever made of David to Dubai’s rescheduled Expo 2020 later this year.

This project, which began several months ago, is being carried out in three distinct stages.

First, high-tech scanners are used to make an exact digital version of the statue. Then, the individual parts are 3D-printed and finally, these parts are assembled and refined by a dedicated team of restorers.

To ensure the utmost precision of every last detail of the sculpture, researchers from the University of Florence collaborated with Hexagon, a Swedish multinational company. Together they scanned the statue using a tracer combined with a laser.

Technicians then used a projector to illuminate the surface and capture all of the details with two high-resolution cameras.

"The challenge here is, being a pilot project, a pilot model, to bring together all these materials, all these technologies through chemistry, physics, and hard work, because our eyes and hands are always under pressure," said Nicola Salvioli, who is leading the group of restorers on this project.

In a small workshop in the centre of Florence, she and her team are taking the 3D prints of the digital version in order to carry out a sort of make-up session on the pieces.

"We are covering it in stone, first of all, to give it the appearance of Michelangelo's David, and then to characterise it, to render on the surface those cracks, fractures, stains, abrasions, the more or less smooth parts, and thus to give a soul to what is, in reality, a copy that has been transformed from digital into physical matter," said Savioli.

While its twin will be showcased to the world at Dubai’s Expo in October, the original statue of David will remain in Florence awaiting the return of the 1.5 million visitors who came every year before the pandemic hit.

"We will send him as a messenger to the Expo in Dubai," said Cecilie Hollberg, the director of the Galleria dell'Accademia.

"He will show us how to go on in this period, but the original will always stay here".