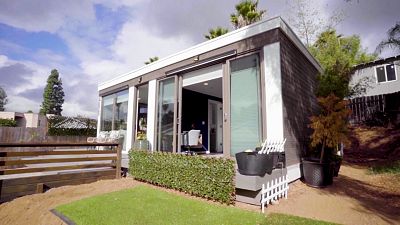 These days, 3D printing is used to produce anything from toys and auto parts to prosthetic limbs and organs.

But now, a new generation of entrepreneurs has set their sights on using this new technology to revolutionise the construction industry.

At a time when housing demand around the world is soaring, 3D printed houses, they argue, could be the answer to making construction faster, cheaper, and more sustainable.

"With 3D printing, we're able to print exactly what we need," Sam Ruben who is the co-founder and chief sustainability officer of California-based 3D printing construction company, Mighty Buildings, said.

"It's effectively zero-waste construction, meaning we're eliminating the three to five pounds per square foot that goes to landfill in a traditional build, which adds up to about two to three tonnes of carbon per unit," he added.

To the extent that 3D printing can offer a faster, cheaper way to build even single-family housing units or small units, it can address a portion of the problem

A potential solution to shortages

According to Ruben, 3D printing could also solve the issue of labour shortages in home construction, pointing out that his company’s method reduces labour hours by 90 percent per unit.

In 3D printing, or additive manufacturing as it is also known, a machine takes a digital blueprint and deposits thin layers of material to create the 3D object.

The printer in the Mighty Buildings warehouse produces the entire shell of a studio home by depositing a white substance that hardens to a stone-like material under UV light.

Despite the growing interest in 3D printed homes, experts caution that proponents of the new building technique still have a job to do in persuading the public and regulators that the finished houses are safe, well-built, and aesthetically pleasing.

"To the extent that 3D printing can offer a faster, cheaper way to build even single-family housing units or small units, it can address a portion of the problem," Michelle Boyd, director of the Housing Lab at the University of California, Berkeley's Terner Center for Housing Innovation, said.

"So we need innovation in the materials we use, the processes and really from soup to nuts, how we build housing".

Watch the full interview in the media player above.