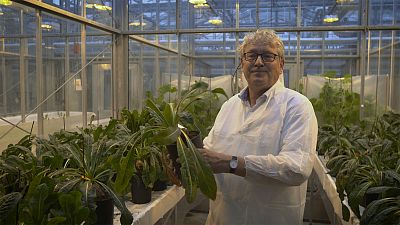 Dirk Bosch is a Dutch biochemist. He's in charge of the coordination of the CHIC project, which aims to boost the used of under-utilized plants like chicory. He explained to Euronews why he sees such huge potential hidden in its roots.

"The interesting part of chicory is this root because this root makes food fibres and food fibres are extracted from them and are used in yoghurts in bars and it’s healthy for your gut," he said.

"The project is about to capture that potential because now only the food fibres are isolated, but we want to create different varieties of chicory, and each will produce a different compound, different medicine, different food fibers," he added.

"The problem with chicory is that it’s very difficult to breed, it’s very difficult to make new varieties, that make new products as we aim to do. What we want to do is to produce new breeding technics, making small changes in the genome of chicory so it will make better products, better medicines, better Inulin. We try to introduce this not to make the plants more resistant to pest, it is already by itself, that is why we have chosen also this beautiful plant, but we want to make products that are useful for the consumers and for the health of the consumers actually."