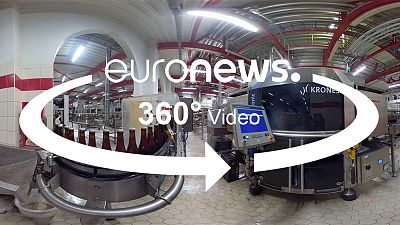 This 19th century abbey in the Netherlands produces around 10 thousand bottles of beer per hour   -   Copyright  euronews
By Paul Hackett  •  Updated: 06/10/2020

The De Koningshoeven Abbey at Tilburg, south of The Netherlands started to brew beer in 1884 as a way to finance itself and contribute to charitable causes.

The brewery is now totally industrialized; it produces around 10 thousand bottles of beer per hour and employs some 30 workers.

The abbey´s prior and director of the brewery, Frère Isaac takes us to an immersive guided tour through the bottling facilities.

"We have 4 different brands of beer. These are special beers, we can´t compare them to normal beers."

"These are "Trappist" beers; there are only 12 breweries worldwide where this beer can be brewed. Our beers are a bit stronger than average beers; a bit like the Pilsener beers."

"We also have one variety of beer that is brewed ecologically; it is an organic beer."

"We brew 8 different varieties of beer in total. And amongst those varieties, we have a certain degree of specialisation. For instance, one of our varieties is what we call "Quadrupel", it is still made in wooden barrels, where we keep the beer for one whole year."

"It is not that we produce specifically a beer with this method. We just take beer that has been produced with standard methods and we put it in wooden barrels."

"We produce every year some 100.000 hectolitres. If you multiply by 100, this gives a total beer production of more than 10 million litres of beer."

The magic of mushroom compost