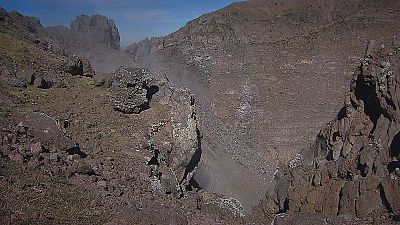 The volcano is one of the most powerful representations of nature, it can change territories and subsequently the history of human kind. Knowing its behaviour during an eruption is essential in order to understand its evolution. In Naples, which lies in the shadow of the Vesuvius’ volcano, a new project is hoping to uncover the clock-work-like mechanics behind an eruption.

The bay of Naples is potentially one of the most dangerous areas in the world. The densely-inhabited city lies in the middle of a volcanic system made up of the Phlegraean Fields, the island of Ischia and Vesuvius, which German writer Goethe once called “a peak of hell rising in the midst of paradise”. It’s the perfect case study for researchers from the Chronos project.

Mauro Di Vito, Volcanologist, from the National Institute of Geophysics and Volcanology, said: “What we know less about is the supply system of volcanoes: where magma is formed, the evolution of magmas. To find this out we would need to use techniques like tomography, using x-ray as we do on bodies, and studying the rocks.”

The study of rocks is at the heart of this European Union-funded project. Chronos scientists are combining advanced theoretical models and unique laboratory techniques in the hope of unraveling the mystery behind the timing of a volcanic eruption. Euronews reporter Claudio Rosmino asked why studying a volcanic rocks is so important.

Diego Perugini, a petrologist at the University of Perugia, said: “A rock is like a broken clock at the scene of a crime, it shows the time of the incident.
“It is precisely what we want to do with Chronos, to define the timelines that have brought a volcanic system from a state of quiescence to a state of activity”

It’s impossible to study the how an eruption happens from inside a volcano because of the fiery temperatures, so researchers are starting with volcanic rock and working backwards to its liquid state of magma. Mr Perugini added: “The model that we look at works in this way; when a new, hotter magma arrives in the underground magma chamber it triggers a mixing process similar, to the one we see in a cup of Cappucino, when you mix coffee with milk. The longer you stir the milk and coffee, the better the homogeneity. Thanks to this information we can read from the rocks how much time has elapsed from the start of this mixing process to the beginning of the eruption.”

To do this, the team at the University of Perugia has created the world’s first magma-mixing machine, which melts and blends samples of volcanic rock. As every volcanic system has a unique subterranean mineral structure and magma, each volcano is left with its own geological fingerprint.

Daniele Morgavi, a volcanologist at the University of Perugia, said: “We bring the rock to the melting state, then we need to characterize the physical properties of the magma and for that we use a viscometer, which measure viscosity at high temperature.”

The mixed magma, once solidified, will then be analyzed in depth to uncover its new characteristics. Repeating the tests at different stages of the melting process will produce a chronology of the structural and chemical changes.

Hope For the Future

The Chronos project has already revealed some important information about the eruption timescale, as well as the reliability of the model.

Mr Perugini explained: “What has intrigued us is that the time elapsed between the start of the mixing process and the beginning of the eruption is around 20 or 30 minutes.
“A statistical analysis we have done on the 200 powerful eruptions on the planet has shown that this mixing process happens in 99% of cases.”

The eruption of a volcano is still an unpredictable phenomenon. But understanding the internal processes of an eruption could help spot warning signs and mitigate the potential impact of volcanic activity on society.

Takeaway: the clock of volcanoes