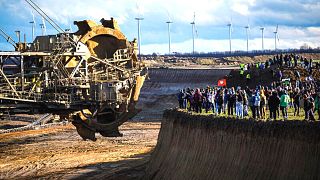 Greenpeace activists take part in the special "village walk" to Lützerath earlier this month.   -   Copyright  © Bernd Lauter / Greenpeace
The opinions expressed in this article are those of the author and do not represent in any way the editorial position of Euronews.
By Martin Kaiser  •  Updated: 21/01/2023

Last weekend, 35,000 people from all walks of life gathered to defend the German village of Lützerath.

Even after the rough eviction of the activists who have been occupying the place for more than two years, many others showed up in solidarity to stop energy giant RWE from further destroying this small community.

The fossil fuel company wants to demolish the village to expand its coal mine, Garzweiler, which is already one of the biggest carbon bombs in Europe.

Underneath Lützerath lies 280 million tons of lignite coal, the most climate-damaging energy source. And accessing it means expropriating the property of an entire village - which has already been done.

It also means making it impossible for Germany to stay within its remaining 1.5-compatible carbon budget, putting the goal set in the Paris Agreement to keep global temperature rise below 1.5°C under serious threat. Even though Germany does not need this coal to secure its energy supply.

The story of Lützerath has played out countless times elsewhere

So why does the company insist on digging coal out of the ground and expanding its operations? Because it can. Despite being immoral and illegitimate, it's legal and it's still profitable.

RWE will be co-responsible for trespassing the 1.5°C limit and all the devastating climate impacts and human rights violations that come with an escalation of the climate crisis. And what is terrible is that RWE is not the exception, but the rule.

Fossil fuel companies are responsible for countless oil spills and methane emissions. ExxonMobil and TotalEnergies have known for decades about the climate impact of their businesses. There are allegations of complicity in violence against ExxonMobil in Indonesia.

Fossil fuel companies have been polluting and destroying people's lives since the very beginning of their existence. We need to call these acts what they are: crimes.

Just 100 companies are responsible for more than 70 per cent of global greenhouse gas emissions.

The climate crisis is rooted in an unjust distribution of power, which is in the hands of the wealthiest one per cent who put their profits as the highest priority. Just 100 companies are responsible for more than 70 per cent of global greenhouse gas emissions.

And far from working toward the common good, the fossil fuel industry is pouring a lot of money into lobbying and advertisements to increase consumption of fossil fuels.

This industry is the problem, not part of the solution. It will fight to the bitter end to get the last bit of coal, gas and oil out. And governments are all too often complicit in this. Corporate Europe Observatory has revealed how often employees move between industry and government and how companies have privileged access to decision-makers.

But the climate movement is fighting back

On the other hand, people, movements and environmental organisations are challenging the power of these companies. Lützerath has become a particularly inspiring example of the courageous fight against the crimes committed by the fossil fuel industry and the fight for a fair world and for climate justice.

35,000 ordinary people in Europe have responded to the call of the activists to come to Lützerath to defend the village. Ironically, these peaceful, non-violent defenders of life are being treated like criminals, forcibly removed from the village; some have reportedly been beaten and pepper-sprayed by the police.

There are communities like Lützerath all over the world that are standing against the atrocities by the fossil fuels industry: the East African Crude Oil Pipeline, those in Vaca Muerta, Argentina resisting fracking, the Adivasis in India fighting to save the last swathes of ancient forest, Indigenous warriors in North America resisting pipelines... Greenpeace stands with the countless activists and frontline communities across the globe valiantly fighting to save our planet, the home of all living beings.

The movement for climate justice is growing, because people are tired of the fossil fuel industry’s criminal activities. It is time to stop these companies and to hold them accountable.