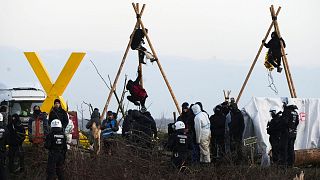 Police have evicted almost all climate activists from a German village that has become emblematic of the fight against fossil fuels.

The hamlet of Luetzerath, west of Cologne, is set to be bulldozed to make way for the expansion of a coal mine.

Environmental campaigners have staged a demonstration in the condemned village but successful efforts to evict them have taken place.

Organisers say that police have surrounded the village and that most activists have been removed apart from some activists in treehouses.

However, German climate campaigners are not backing down. A large local protest is set to take place on Saturday and Greta Thunberg travelled to Luetzerath on Friday to join protesters.

Climate strike week 230. We are currently in Lützerath, a German village threatened to be demolished for an expansion of a coal mine. People have been resisting for years. Join us here at 12 or a local protest tomorrow to demand that #LützerathBleibt !#ClimateStrikepic.twitter.com/hGrCK6ZQew

Why are climate activists occupying a German village?

Environmentalists have been occupying Luetzerath for months in a protest against the planned expansion of the nearby Garzweiler coal mine.

Around 1,000 activists have been holed up in the village, some camping and others in tree houses. They have dug trenches, built barricades and erected giant tripods in an effort to block police advances.

Among the demonstrators is Friday's For Future climate activist Luisa Neubauer.

"This behind us is the biggest source of CO2 in Europe," Luisa explained earlier this week.

"These are emissions that affect people all over the world. That means that we also stand here for people who depend on us to speak up when the government doesn't dare to do so."

The protest has become a symbol of the climate justice movement and attracted international attention.

Why is Luetzerath being demolished?

The utility company RWE says it needs the coal beneath Luetzerath to ensure Germany's energy security, after cuts in gas supplies from Russia since the invasion of Ukraine.

In return for the demolition of Luetzerath, the company says it will close its open-cast mine by 2030 rather than 2038 as originally agreed.

But activists argue that this would create vast amounts of greenhouse gas emissions, making it impossible for Germany to meet its commitments under the 2015 Paris climate agreement.

They also cite studies suggesting the coal extracted may never be needed.

Police in riot gear moved into the area on Wednesday (11 January) and began forcibly evicting activists.

The demonstrators threw stones and fireworks at the officers, who said people “currently have the possibility to leave the site without further police measures.”

Several dozen activists remain in the village but police removed a group from a roadblock just outside.

Officers entered farm warehouses - one used as a soup kitchen by the protesters - to evict activists squatting inside.

Lakshmi Thevasagayam, a spokeswoman for the Luetzerath Lives activist group, called the village “the European place of crystallisation for the climate movement.”

“We are standing against RWE making a metre of progress with its diggers, because we know that the coal under Luetzerath isn’t needed for energy security - it must remain in the ground so that we can achieve climate justice,” she said.