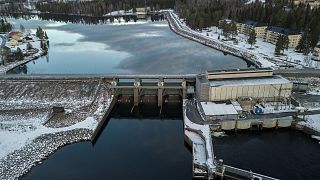 The Boden hydropower plant near Lulea, northern Sweden - one of many projects contributing to the country's impressive renewables record.   -   Copyright  Vattenfall/Handout via REUTERS
By Lottie Limb  •  Updated: 20/01/2023

More than a fifth of energy used in the European Union in 2021 came from renewables, new data shows.

Solar, wind and other ‘green’ sources contributed 21.8 per cent to the EU’s total energy consumption, according to Eurostat.

This was a 0.3 per cent drop on 2020; the first decrease ever recorded. Experts say it was due to a surge in energy use after pandemic lockdowns were lifted.

But the report shows that Europe’s energy infrastructure is still heading in the right direction, spurred on by recent global events.

Last month, the International Energy Agency revealed that the world is set to add as much renewable power in the next five years as it did in the last 20.

“Renewables were already expanding quickly, but the global energy crisis has kicked them into an extraordinary new phase of even faster growth as countries seek to capitalise on their energy security benefits,” explained IEA executive director Fatih Birol.

So Eurostat’s 2022 figures are sure to tell a more promising story. Here’s what we know about the EU’s energy consumption in the meantime.

Why European countries are using the most renewables?

Sweden once again topped the list as the EU country with the highest share of renewable energy in 2021.

The Nordic nation got almost two thirds (63 per cent) of its energy from renewable sources that year - mainly from biomass, hydropower, wind, heat pumps and liquid biofuels. Though it’s a promising figure, some campaigners argue that bioenergy - burning waste from forests, for example - is not really renewable.

Next on the list was Finland, another heavily forested country, with a 43 per cent share. Latvia came third with a 42 per cent share which mostly came from biomass and hydropower.

Estonia, Austria and Denmark followed, with 38 per cent, 36 per cent and 35 per cent of their energy coming from renewables respectively. These countries have high amounts of hydropower and wind in their energy mixes.

But when it comes to European countries more broadly, two non-EU countries are still well ahead.

Iceland gets the greatest share of its energy from renewable sources in Europe, thanks to its great geothermal resources. Around 86 per cent of its clean energy came from this source according to Eurostat’s calculations.

Norway came in second place with a stellar 76 per cent from renewables.

Which EU countries are falling behind on renewables?

As the analysts note, there is still a long way to go before the EU reaches its renewables target. This is currently set at 40 per cent by 2030, but - under the new REPowerEU plan - there is ongoing discussion about upping it to 45 per cent.

That higher target would mean 69 per cent of electricity would come from renewables, according to energy think tank Ember. EU countries are collectively targeting 63 per cent renewable electricity by 2030, but challenges around construction permits for example, risk holding the bloc’s ambition back.

The IEA also points to improving state auctions for clean energy projects, and rooftop solar incentives as means of speeding up the renewable revolution.