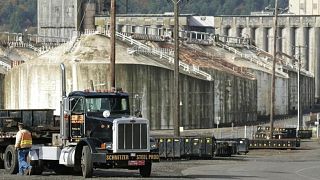 Corporate sustainability is a hot topic at this year's World Economic Forum in Davos. But which company is the world's most sustainable?

Each year, Canadian research firm Corporate Knights creates the Global 100, an index of what it deems to be the world's 100 greenest firms. It aims to spotlight the corporations that do the most good for people and planet, "driving the transition to a low-carbon, circular economy".

In the latest rankings, published this week, wind turbine maker Vestas Wind has been knocked off the top spot.

"If one of the world's dirtiest sectors can produce the most sustainable company in the world, then there is no excuse for any company in any sector not to step up," says Corporate Knights CEO Toby Heaps.

How are companies' green credentials assessed?

Nearly 7,000 corporations with revenue over $1 billion (€9.7 bn) are assessed for the annual report.

Companies are assessed on 25 indicators including taxes paid, sustainable revenue and investment, carbon productivity, and racial and gender diversity. The ratio of CEO to average worker pay is additionally taken into account.

The companies must also have sustainable solutions at the heart of their business models and invest to reduce their carbon footprint.

Some indicators have fixed scores, while others are weighted according to each industry's relative impact on the overall economy.

Why has a steel company been named the world's most sustainable corporation?

As pointed out by Heaps, steel is often seen as a 'dirty' industry. Steel production accounts for around 8 per cent of total global CO2 emissions. Most steel is produced by reducing iron or using energy intensive coal-fired furnaces.

Recycling steel is one way to reduce emissions, as is moving away from fossil fuels in its production. Green steel production has progressed in recent years, with new technologies emerging to decarbonise the industry. Approaches include electricity or 'green' hydrogen powered furnaces, carbon capture and improving recyclability.

The firm topped the Global 100 thanks tovast improvements made in its energy, carbon, water and waste 'productivity', meaning it used these resources more efficiently when measured against revenue.

The company increased its energy productivity by 74 per cent, water productivity by 69 per cent and carbon productivity by 55 per cent in 2021. It also reported 100 per cent of its $2.8 billion (€2.6 bn) revenues and all of its $0.1 billion investment went to sustainable projects in 2021, though the report does not detail the projects.

How influential is the Global 100 ranking?

Corporate Knights' Global 100 is used by the likes of Goldman Sachs to construct private wealth portfolios. It will also serve as the benchmark for a new index fund and exchange traded fund from Canada's Mackenzie Investments this year.

The ranking is valuable for cross-industry comparison, too - something which is "notoriously difficult" according to Lisa Ekstrand, head of sustainability at Vestas, the wind turbine company that came in second place. Vestas uses the ranking to identify improvement areas, she adds.