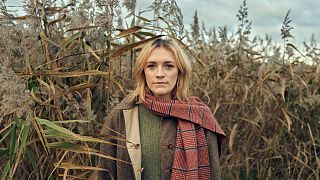 Charlotte Ritchie and other celebs discuss their climate anxiety as data shows 68% of Brits are affected.   -   Copyright  Tom Oldham
By Lottie Limb  •  Updated: 18/01/2023

Two-thirds of people in the UK are experiencing eco-anxiety, new data shows.

After a record-breaking summer heatwave, and dire warnings from the UN, 68 per cent of Brits surveyed by YouGov declared that they were worried about climate change and its effects.

The poll was carried out on behalf of charity Friends of the Earth, which has teamed up with concerned celebrities to help people address their fears.

Callum Scott Howells, ‘It’s a Sin’ TV drama star, says, “The climate crisis is something I think about, and I know how it feels to lie awake at night worrying about the future of our planet.”

What is eco-anxiety and why do we experience it?

Eco-anxiety, described as the feelings of stress and fear that many of us feel about the future of the planet, is a rational response to the crisis.

Though the UK has been relatively insulated from its worst effects, unprecedented temperatures of more than 40C in July drove home the reality of our carbon-intensive lifestyles.

“It’s not surprising so many people of all ages are increasingly worried about climate change, especially in the face of continued government inaction,” says Friends of the Earth healthy environment campaigner Emi Murphy. “It’s only human for us to admit that climate change is causing anxiety as it genuinely is a crisis.”

Among the 1,719 surveyed who indicated that they were anxious, people were evenly split across age groups.

Eco-anxiety appeared higher among those who voted Remain in the Brexit referendum.

Eco-anxiety appeared higher among women and those who voted Remain in the 2016 Brexit referendum (82 per cent compared to 57 per cent for Leave voters). Climate concern was also lower among Conservative voters.

The importance of time in nature

As an antidote to despair, some of the UK’s most popular actors, including Charlotte Ritchie, Himesh Patel, Saffron Hocking and Will Poulter, are highlighting the importance of community and connection with nature.

A new series of portraits by award-winning photographer Tom Oldham shows the stars in some of their most cherished - and fragile - natural spaces.

‘Ghosts’ and ‘Feel Good’ lead Ritchie, pictured in RSPB Rainham Marshes, says ‘‘I’ve always spent a lot of time in nature, and it is really important to me that the beautiful environments that I enjoy remain unharmed by climate change.

“The more we get to know our local spaces, the more inspired we will be to protect them.”

Friends of the Earth’s survey found that 69 per cent of Brits feel they don’t experience nature as much as they would like to, despite the physical and mental health benefits.

Here are some other tips compiled by the environmental campaign group to help ease our anxiety by turning it into action.

What actions can we take to reduce eco-anxiety?

Charity shops and second-hand clothes apps are great places to look for brands you already wear and love to find some new outfit inspiration. Ditch the fast-fashion and get some feel-good threads instead. Second-hand kitchenware, tools and toys can keep more cash in your wallet and stop so much stuff being produced, which is good for the planet.

You can also rent clothes for one-off occasions. A great way to have something new to wear without the guilt of consumption.

Switch some of your meals to veggie or vegan recipes and use it as an excuse to indulge in some tasty plant-based treats, cakes and desserts. Cutting back on meat and dairy reduces your impact on climate change, as they produce more carbon and methane and use more water and land than producing the same amount of calories from plants.

Make sure you take reusable bags, coffee cups and water bottles out with you. Snacks and drinks on the move make it hard to avoid plastic, so go armed and be prepared. In the bathroom replace your bottles for bars of soap, bubble-bath and shampoo.

Make your outside space wildlife friendly. Even a window box or doorstep pot could be a feeding pitstop for bees and insects.

Some ways to save energy are cheap and easy, like filling your freezer but not over-packing your fridge and making door snakes to cut out draughts. Others need a bit more time and investment, like loft insulation or buying an air fryer, but these will save you money in the long run.

4. Swap flights for a UK vacation

Flights make up 7 per cent of the UK’s overall climate emissions. The UK has such varied landscapes, from mountains and forests to beaches and craggy coastlines to explore. Take a different kind of holiday - try camping, cycling, take a watercolour course or learn how to rock climb.

3. Switch to a green bank

Most car emissions are for journeys less than five miles, journeys that could be made on a bike or on foot. If you can’t power yourself, then look at public transport or car-sharing .

Getting involved with an environmental campaign group like Friends of the Earth helps keep you abreast of the best actions to take. Sign a petition, email your MP or join a local action group to meet people making positive changes in your area.