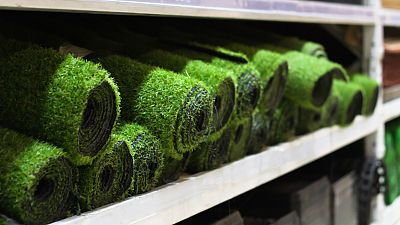 As a petition to ban the sale of artificial grass is put forward in one European country, we look at the environmental impact of fake plants.   -   Copyright  Canva
By Julie Gaubert  •  Updated: 30/06/2021

After a recent petition submitted to the UK government called for a ban on the sale of artificial grass, questions around the environmental impact of plastic greenery are being raised.

Have you ever been tempted by the idea of a perfectly green grassy lawn, with no yellow patches cropping up when the weather warms up? Or a nice little fake succulent plant to place on your window sill and not water for days?

It turns out the environmental impact of astroturf could be worse than you think.

Why ban the sale of artificial grass?

“Banning the sale of artificial grass could be a small step towards increasing the UK biodiversity, reducing our carbon footprint and helping our ever dwindling insect and wildlife population,” it highlights.

29,321 participants signed the petition arguing that artificial grass “creates huge volumes of plastic, can’t always be recycled and can pollute soils with microplastics,” which contribute highly to a consequent carbon footprint.

But if you look at the bigger picture, there are also other damaging effects of the plastic grass, such as flooding. The grass “contributes to flooding [and] can overheat” making the lawns “unusable and has no wildlife benefit.”

A similar UK petition was issued in September 2020, and at the time only collected 11,667 signatures. The answer given at that time by the government was the following: “We prefer to help people and companies make the right choice, rather than banning items outright.”

If this new call to action reaches 100,000 signatures before November 17 2021, it will be considered for debate in parliament.

Are there advantages of artificial grass?

Real grass needs water, this is undoubtedly a fact. Depending on the season and its superficy, it can require a lot of water.

Currently the average Londoner consumes 164 litres of water per day, around 20 litres above the national average, according to the Mayor of London. So a conscious use of such a precious resource may make the difference when attempting to slow down climate change.

On the other hand, artificial grass doesn’t need that much water, if any.

It’s also worth taking into account the electricity savings you make by not having to mow the lawn, or fuel if you have a petrol lawnmower.

But just how eco-friendly is artificial greenery?

Apart from water and electricity usage, the environmental impact of artificial grass and fake plants is far from positive.

The problem is fake plants don’t actively clean our environment, they are not going to improve the air by absorbing CO2 and transforming it into oxygen (the air we breathe).

This action is not only useful in a closed room, but it actually contributes to combatting climate warming on every part of the planet.

And what happens to these fake plants, when you no longer want them? They won’t have the chance to contribute to your compost and will be hard to recycle.

The whole process of creating artificial greenery, from producing plastic parts to dying them the right colour in large factories, is another concern to bear in mind.

Why not let nature do its part, without almost any human intervention?

Maltese Olympian breaks world record to help save our oceans

5 meat-free alternatives to the world's most expensive burger