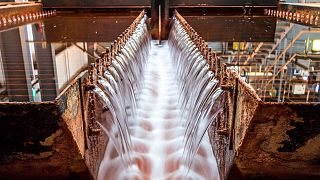 In the UK, around a quarter of homes sit above the country’s sprawling warren of old mining tunnels, according to the British Coal Authority. Following decades of disuse, they have gradually flooded.

Warmed by the earth, this liquid offers one answer to our renewable energy needs. It can be pumped up and used to power homes and buildings in the local area.

With an estimated 2 billion cubic metres of warm water - more than a quarter of the volume of Loch Ness - geologists believe that Britain’s mine shafts hold one of the biggest underused sources of clean energy.

“Recovering heat from mine water below the ground within abandoned coal mines provides an exciting opportunity to generate a low carbon, secure supply of heat, benefitting people living or working in buildings on the coalfields,” says Gareth Farr, head of heat and by-product innovation at the Coal Authority.

“With many millions of people living upon abandoned coalfields in Great Britain, the potential for mine water heat could be significant.”

Tapping into the heat from water in the mines has the added benefit of boosting the economies of some of the communities most badly hit by deep coal mining closures in the 1980s. So how does it work exactly, and where is it taking off?

How can flooded mines help to heat homes?

Mine water gets warmer the deeper it goes, as this interactive map of old coal mines from the UK Coal Authority shows. Temperatures typically range from 10 to 20C but can reach up to 45C at depths of 1km - such as the Yorkshire site.

Left to mix with the subterranean rock, the water often contains toxic compounds. But as a thermal source it is a valuable resource that can be harnessed through drilling boreholes which bring it to the surface.

The water is then directed through heat pumps and extractors which compress the liquid, raising it to a much higher temperature before distributing it through heating networks.

Once its heat has been absorbed in surrounding buildings, the water can be poured back into the mine system where it will be warmed up again.

Mine water heat also has the advantage of working all year round. Temperatures aren’t affected by the seasons, and the water can be used to cool homes as well as heat them.

Which UK cities are tapping into the energy source?

The UK is in an exploratory stage with its mine water heat schemes. The UK Geoenergy Observatory (UKGEOS) based in Glasgow and run by the British Geological Survey, is one of the key research stations.

After the busy mines of the Scottish city and nearby town of Rutherglen shut, natural floods filled them with water of about 12C. Last summer, a dozen boreholes drilled into the site and fitted with hundreds of sensors provided a clearer image of network of flooded tunnels. They revealed how fast water flows among mines, how warm it is, how quickly it replenishes and reheats.

“The data from these 12 boreholes in Glasgow will help scientists around the world understand the subsurface and geothermal energy better,” said UKGEOS’s Alan MacDonald.

The Glasgow Observatory and another project in Cheshire are part of a £31 million (€37 million) investment by the Department for Business, Energy and Industrial Strategy (BEIS). The funds being devoted to this research show the increasing interest the government is taking in this striking form of geothermal energy.

Once at the heart of the Industrial Revolution, North East England is now breaking ground on the practical side of this alternative energy source. Gateshead Council is set to commission its 3MW mine water heat network later this year, explains Farr, the first of its kind in the UK to supply multiple homes and businesses across a city.

“This is just one example of how we are turning our coal mining legacy into a geo-energy asset for a greener, more sustainable future,” the heating expert adds.

Tyneside too is turning its old Hebburn colliery, abandoned since the 1930s, into a geothermal generator. The £7.7 million (€9.2 million) investment - half funded by South Tyneside Council, half by the European Regional Development Fund - is on track to power a number of council buildings by summer 2023.

Even better, its water-source heat pump will be mainly powered by solar panels on nearby roofs.

The European pioneers of geothermal energy

By tapping into its history to create new geo-energy assets, the UK is following in the footsteps of other European countries.

The world’s first mine water power station opened in the Dutch city of Heerlen in 2008. It is now connected to around 500 houses and commercial facilities - cutting the area's carbon emissions from heating by almost two thirds.

A similar project is underway in the rugged Asturias region of northern Spain, where flooded coal shafts are heating (and cooling) a hospital, university and numerous other buildings.

"Geothermal energy has given a second life to our coal mines," Asturias's director of energy María Belarmina Díaz Aguado told the BBC.

But though the first mine water power station is on European ground, the technology was harnessed nearly two decades earlier in Springhill, Nova Scotia.

Synonymous with mining disasters, the Canadian community started using the heat from its dormant coal mines in 1989. One packaging firm in the town now boasts a 100 per cent renewable system, all year round.